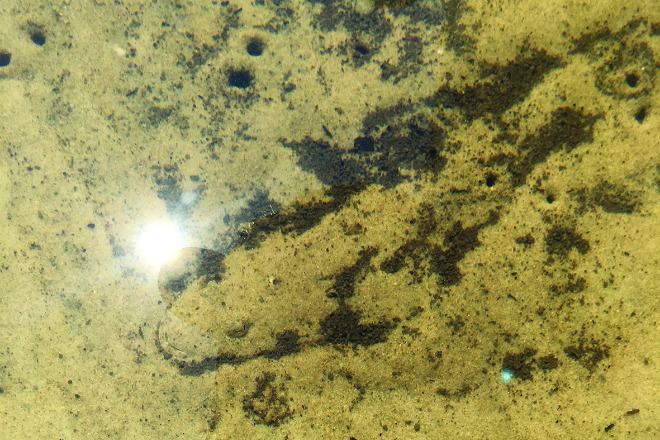 Tips on flicking plastics for flathead.

Things are finally starting to settle down after the horrendous weather of June and July and the Richmond River is getting a chance to clean up after yet another flood.

Some large tides over the past few weeks have certainly helped speed up the process, which has allowed plenty of fish to make their way back upriver. A sharp drop in both the air and water temperatures has also signalled the arrival of winter in a big way.

The larger tides have brought quality bream from the beaches into the lower reaches of the river. Reports of captures have been coming from the breakwalls, behind the CBD and nearly as far upstream as Pimlico Island.

The run-in tide has certainly been the best time to target them but a number of fish have also been caught during the run-out, especially from the breakwalls at night. Mullet gut, mullet fillets and pilchards have all been good bait options for the larger fish, with plenty of smaller fish caught using prawns.

Soft plastics in natural colours have had great success of late, especially if rigged on 1/12oz or 1/8oz jig heads. Several fish have also taken a liking to a variety of 1/4oz metal blades when slowly hopping them off the bottom.

Unfortunately, the flathead have not been as accommodating as the bream, with the cold weather making them a much more difficult proposition to catch.

The better numbers seem be taken in the afternoons. I think this has mostly been because the weather has been warmer after lunch, allowing the flathead to be a little more active and aggressive as the day has warmed.

The usual baits such as blue and white pilchards and prawns have all worked quite well and lure throwers have landed a few fish on metal blades. The brighter the colour, the better at the moment, but that is probably because of the extra colour in the water from the recent flood. Applying plenty of scent to your lures is also a great option given the poor visibility and colder conditions. Scent will hopefully give the fish enough encouragement to have a strike at your lure.

While the flathead have been a little on the quiet side, plenty of mulloway have been cruising the lower reaches of the river. As usual, those with live baits have tasted success more regularly than anglers using dead baits or lures.

The change of tides has been the better time to try your luck and I think the top of the tide is the best option because the dirty water will have been pushed back a little and hopefully some more baitfish will be pushing into the river along the way.

The beaches are starting to form up again after the storms and flood. With the formations coming back to the beaches, we have begun to see an improvement in the numbers of tailor and bream. Garfish, pilchards and mullet fillets are all good bait options for tailor but it will be worth throwing metal spinners from the rocks or beach, just for something different.

South Ballina and Seven Mile beaches have been great spots to try your luck, but you will have to move around a little until you find a likely looking gutter. The weather pattern over the past month has not been normal for this time of year.

We have had plenty of days with strong wind and large swells, and this has made it very difficult to get any offshore fishing done. On the odd day fishers have been able to get out, they have landed tuna, snapper and mulloway on the close reefs and small snapper, flathead and tuskfish on the 32-fathom line. Most anglers have used a mix of baits and lures to get the job done.

If the weather wasn’t a big enough problem of late, we have had reports of large leatherjacket out wide of both Coffs Harbour and Evans Head. When heading out next, make sure you have a good supply of hooks and sinkers to keep up with the jackets.

Lastly, a couple of quick reminders. Don’t forget to grab a fishing licence before wetting a line in NSW. The team from NSW Department of Primary Industries Fisheries has been out and about making sure anglers have their licences on them when fishing. Your day will become very expensive if you don’t have one. Also, don’t forget it is still closed season for bass and estuary perch in all rivers and estuaries in NSW until August 31. This does not mean you can’t target bass during this period, it simply means you are not permitted to keep any. Well that’s all from me this month. Until next time, tight lines!