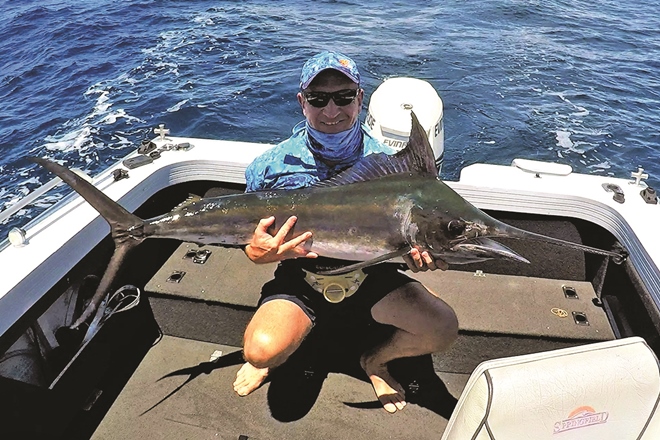 The author with his first juvenile marlin.

HOWDY folks, I hope you made some New Year’s fishing resolutions, but if not, it’s not too late.

I must admit that in late-2017, catching black marlin was at the front of my mind in terms of my 2018 wish list. I was thinking it might have to wait until late-November 2018 or so and I would need to travel to the top end of Fraser Island. Fortunately, I saw some pictures and posts of juvenile beakies from one of my fellow Mad Keen Fishing-sponsored anglers on the Gold Coast and before long I had lined up a trip with him.

So out I went with Jason Heller and not only got my first black marlin, but a second too and lost another just 10m from the boat. All fish were caught by trolling skirted lures. It was quite surreal to be catching black marlin with the skyscrapers of the Gold Coast in the background and the beaches of South Stradbroke Island so close.

This article relays a bit of information I gleaned from that trip to pass on to those who haven’t tried catching black marlin before. While Jason is very quick to point out he is still learning too and no expert in this field, he clearly had a plan, stuck to it and it worked. With nine fish landed by early January from only a handful of trips this season in a smallish 5.3m trailer boat, he is clearly doing something right. With the right gear and safety precautions, a bit of preparation and time on the water, juvenile blacks are actually in more trailer boat anglers’ reach than you might have thought.

Warm water temperatures, blue water and the presence of lots of bait seem to be key to the arrival of the fish ‘in close’ to the Gold Coast. These conditions generally occur from the first or second week of December through to February. On the day we headed out, the surface water temperature peaked at 25.7C in the area we fished between 4km and 7km (25-35m depth) off the coast.

Several days of northeasterly wind had caused a drop in water temperature in the days before we went out.

Luckily though, a change in wind direction to the south had virtually overnight pushed the warmer, blue water back in. How, you might ask?

In very simple terms, persistent northeasterlies move large amounts of warmer surface water towards the beach. This water then gets pushed or sucked back out to the left (in the southern hemisphere) and out to sea. In its place is colder water drawn from an upwelling of colder, deeper water, thus bringing colder water closer to shore. When southeasterlies return, the wind and wave action deflect the warmer offshore water back to the left and towards the beach.

Planning for a catch

Like all good anglers, Jason had a plan. It was to target some areas just a few kilometres out from both the Gold Coast Seaway and Jumpinpin, as well as some areas in between. The contours of the bottom here seem to attract concentrations of baitfish and had produced for Jason before. Then when in the general area we would look for current lines and diving birds as signs of baitfish and hope the fish were there chasing them.

Another key part of Jason’s plan for catching black marlin was his sounder setup and keeping track of what was happening. He uses three Lowrance sounders; one at the front of the boat and two at the rear. He will use one of the rear sounders for plotting his route on the chart and the other sounders for watching for bait, fish and the bottom. When trolling for marlin he will look at three readings: left (DownScan), right (sonar) and bottom (StructureScan). The key reason for this is the different frequencies and beam angles show different views and allow you to cross reference.

This helps you decipher if it is bait, fish or structure below. Sometimes the fish and bait will show more clearly on one sounder than the other.

On the day we went out, Jason marked some bait that showed clearly on side scan but faintly on bottom scan and barely on sonar. While we caught nothing initially, we soon returned and hooked three fish. The other part of our plan was what to do when we hooked a fish.

Trolling with four rods, we would retrieve the three without a fish (while keeping the boat moving forward at trolling speed) before we would fight the hooked fish. Keeping a tight line to these fighters is very important, so manoeuvring the boat with bursts of speed can be just as important as the angler keeping the line tight on the fish.

If you are new to fishing for and catching black marlin, pop into Doug Burt’s Tackle World at Labrador and the staff members will help you out with organising the best spread of lures on the boat because they are experts in this field. So there you have it. Black marlin 4km east of South Straddie and North Straddie in a 5.3m tinnie and with relatively inexpensive tackle. There is a little more to it, but with a bit of planning and tips like those from Jason, you too could soon be onto these great fish.

Until next time – bag your mates, not your limit.

Sean caught the fishing bug bad one very cold Canberra day 20 years ago when he was bored and picked up and read Angler's Almanac by the fireplace. Since then he has filled his mind with knowledge from fishing magazines, books, the internet, TAFE fishing courses, guiding fishing charters (estuaries, beach, bay and mountain lakes) and of course 'on water' experience. He and a group of mates formed a social fishing club and soon started to share what they learnt and caught online. Sean is the admin for Ontour Fishing Australia on Facebook, which is a page that shares information, reports and sponsor giveaways and welcomes all to the site. He plans to move into blogging on his new website when time allows.
Previous Plan your weekend at the 2018 Apollo Bay Seafood Festival
Next Gold Coast trevally turning it on