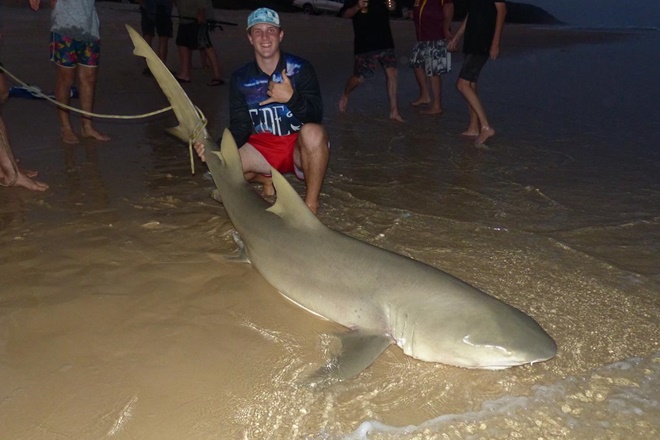 Mitch with a solid lemon shark that took a dart frame.

WITH the fishing and weather patchy on the Gold Coast, we recently headed up to Fraser Island for a boys’ trip away.

With 21 bodies involved, organising is no easy task and with so many people you need to do things on a large scale. By that, I mean a fridge/freezer trailer is a requirement, along with big generators and a tonne of fuel. However, with so many people heading up, spreading the load is relatively easy.

Our trip got off to a slow start with a flat tyre just past Southport on the freezer trailer. No biggy usually, except the spare didn’t want to come off. With a heap of Inox and some persuasion with a hammer we had it off and were on our way again. Until Gympie, where we encountered our second flat on one of the boys’ trucks. Another change and finally we made Rainbow Beach for a well-earned coffee and pie from the local bakery.

We luckily had a heap of rain the week preceding our trip, so the trip over the sand at Inskip Point to the barge and all the way up the island was a breeze. So much so that I was in 2WD with the fridge/freezer trailer all the way to Dundubara where we made camp in front of a fantastic hole. We had the camp set up in a flash and were ready for a frosty beer while the boys soaked a few baits for tailor and sharks. I’ve been using slider rigs for a few years now and didn’t even have my bait in the water for five minutes before I was buckled over with the reel screaming. Unfortunately, the mono wore through after a few minutes, but it gave us confidence that the hole we were fishing would hold fish.

With that, the boys brought out the big overhead gear and wire traces for sharks and we put the newly acquired drone to work, getting the big baits out deep. It didn’t take long, and just as night hit Mitch got a hellish run, but unfortunately the leader knot let go. A few of the crew were up early the following morning and again the drone got the baits out.

It wasn’t long before a rod was screaming and after a short fight a small whaler shark was landed and quickly released. We did a bit of sightseeing during the days with the weather so good and always made it back to camp early to soak a bait right out front. Dart were consistently on the menu, as was the odd tailor.

On Tuesday morning we again sent the drone out to drop the baits in the deep when the damn leader knot caught on the top eye and the drone met a watery grave. We had a few beers to commiserate but the afternoon session made us forget about it, with the tailor moving in for an action-packed session where the boys landed fish almost every cast.

We had a day or so of wind, so we headed over to the western side and up to Sandy Cape. The fishing was ordinary on the western side, with a few whiting and bream caught. Up at the cape, we spied a school of baitfish moving through the shallows and a good throw of the cast net gave us enough hardyheads for a good session. Luke saw something at the water’s edge, ran over and came back with a nice spanner crab that he cooked up.

As we headed home from the cape we had to wait at Ngkala Rocks for vehicles towing trailers to come through because it was very soft. Single vehicles with a bit of speed up had no issues. By the time we hit camp, the wind had died down and the seas settled, so the boys paddled out some baits for sharks.

It wasn’t long before Jye was hooked up solid. After a tough fight a 1.8m whaler was landed. The boys only use circle hooks so the shark is hooked in the jaw, and they had the hook out, pictures taken and the fish released in minutes, which is a credit to them. The following afternoon was a carbon copy and with baits in the water as the sun started to slip behind the dune, the boys were on again.

This time Mitch hooked a sizeable noah that gave him some stick in the breakers. Finally, a lemon shark was landed and the boys ensured it was released quickly after some snaps. Fraser Island never disappoints – you truly do leave your stresses behind once you get on the barge. If you haven’t been yet, do yourself a favour and make the time to get over there. You’ll love it.

Back on the Gold Coast, fishing has been a bit patchy lately. There has been the odd day where snapper have been on the chew and we have already had a few schools of spotted mackerel fly by. The mackerel haven’t been in big numbers as yet because the water has stayed relatively low, with the surface temperature sitting around 22C. Traditionally we see the temperature rise to 23C or more in close by mid-November, which brings the pelagic fish with it. Once that water gets warmer the mackerel will arrive.

The local bars are still pretty ordinary. Tweed River Bar is shallow with the bank out the front. Currumbin Creek Bar is like a maze with the sandbanks, so be careful on anything under half a tide. The dredge was in Tallebudgera Creek Bar but has now been removed. It did nothing to improve the bar, which is shallow. The Seaway is OK, but as always watch the banks to the north and that little build-up of sand to the south that can catch a wave.

‘Til next month, screaming reels to you all.

Heath has been fishing since the age of three and grew up fishing the mighty Georges and Hawkesbury rivers.
Previous Research contributing to southern bluefin tuna recovery wins gongs
Next Simrad Active Imaging Elevates GO series with superior scanning-sonar quality