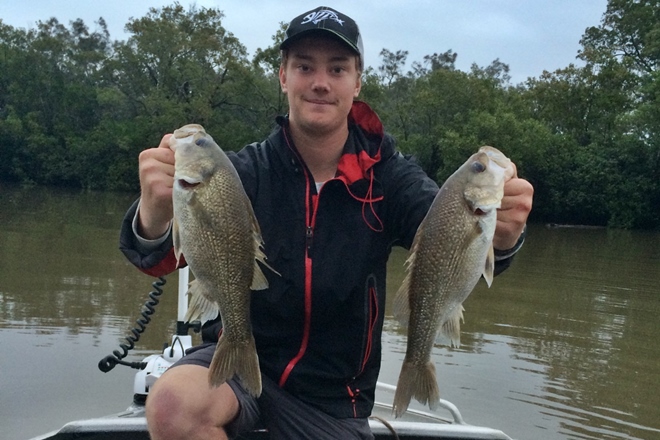 Quality bass will be caught in the river systems this summer.

HELLO and welcome to this month’s edition of BNB.

Well the big bloke in the red suit is nearly here, so I hope you have all been good boys and girls. It seems as if the end of the year has rolled around very quickly, and it certainly seems we rushed into summer at a great rate of knots, but the fishing does not seem to have continued in the same manner. The water temperature has kept climbing steadily but as yet we have not seen any great increase in the numbers of our summer species compared to a month ago. At the time of writing the offshore fishing was still in a bit of a holding pattern. A few snapper, jew and trag have been haunting the close ground such as Lennox and Riordans reefs, and they have happily taken soft plastics, micro jigs and live baits.

I know I said this last month, but the current out on the 32-fathom line and beyond is going to pick up any tick of the clock. The concerning part is when the current does start I think it is going to hit with a vengeance and probably won’t let up until well into the new year. For the bait fishers, this current is going to be exceptionally difficult to fish because 1.5lb or even 2lb of lead may be required to hold bottom on the 32s. As soon as the warm current does start rolling down the hill we will see some mahi mahi hanging around the FAD and may even get a few early season mackerel showing up around Christmas.

From all reports, fishos are having a cracking mackerel run to the north, so it should be another good mackerel season here. And with reports of mahi mahi from Tweed Heads to Byron Bay, they can’t be too far away from hitting our reefs.   The odd pearl perch is still hanging around the 42 and 48-fathom lines. Live baits have accounted for several of the larger models but some of the heavier micro jigs and bright-coloured plastics have also tempted plenty of the smaller fish.

Good numbers of small kingfish have been hammering live baits and knife jigs on the wider grounds. Most of the fish are between 60cm and 90cm, but the odd larger fish has also shown up. A few snapper and small amberjack have also been mixed in among the kingfish, so it has been a bit of a lottery at times to see what you are going to pull up next.

The formations on the beaches over the past month have been a little depressing.

While the odd gutter is visible on South Ballina and Angels beaches, the numbers of fish they are producing has been fairly low. Some of the better action has come from Boulders and Seven Mile beaches, with quality dart and bream taking pipis and beach worms during the run-up tide. At this time of year we usually see a few of the straggling tailor make their way up the coast. Late in the afternoon it will be worth throwing a pilchard, mullet fillet or bonito strip out in a likely looking gutter. You may not see any large numbers of these razor-toothed eating machines, but the ones that do come into the gutters at night are generally quality fish, so be ready and have wire traces handy because these larger fish can do serious damage to your rigs.

Some of the better-quality whiting have been coming from the beaches rather than the Richmond River of late. As with the dart, pipis and beach worms have been the gun baits for these tasty little critters, but if you can’t get your hands on either of those baits, then you could try strips of squid or peeled prawns. Just remember that when fishing the beach for whiting they do not need a lot of water, so don’t be obsessed with finding the deepest gutter you can because quite often they are right at your feet in some of the skinniest water imaginable, particularly at night.

As we all know, summer on the NSW north coast usually produces plenty of rain and even the odd flood or two. At present the Richmond River is the cleanest it has been in a long time but we need a little rain to stimulate activity. I think this may be one of the reasons why the summer species have not kicked on and increased in numbers. One of the other factors might be the reasonably mild weather we are still experiencing. While we have had the odd warm day, we are yet to have a run of scorching hot days, and I’m sure when they arrive the flathead, whiting, jacks and so on will cut loose.

Having said this, we have still seen quality flathead from Pimlico Island to the mouth of the Richmond. Most of the larger fish have taken live herring and the smaller fish have fallen to dark-coloured soft plastics, prawns and white pilchards. The whiting have shown interest in surface lures in recent weeks, especially in some of the shallow areas such as North Creek and Mobbs Bay. Each day has been different, with the level of aggression towards the lures changing constantly and for no apparent reason. Saku Snoop Dogs, Bassday Sugapens, River2Sea Bubble Pops, O.S.P Bent Minnows and Megabass Dog-X JRs are the lures that have been worth trying at different times. Most can be retrofitted with either Ecogear ZX assist hooks or Gamakatsu Treble Wide Gap hooks to improve hook-up rates, so check them out next time you are in your local tackle shop.

One fish species that has been surprisingly numerous this season is mangrove jack. Some good reports have been coming in of quality fish caught on both hard-body lures and live baits. The Atomic Shiner 75, Lucky Craft Pointer in 100mm or 78mm size and Z-Man 4” SwimmerZ have all been good options. Most of the rock walls from Wardell Bridge to the mouth of the river have produced at least a couple of fish in the past month, especially on the run-out tide in the afternoons.

I’m not sure if more of these awesome fighting fish are around this year or more people are targeting them, but either way it’s great to see them in our river system. The best part about most of the jack reports I am getting is that the majority of fish are being released to fight another day.

Before we wrap up for another year I just wanted to say a few words about a wonderful man and fishing fanatic who has passed away. Hans Jensen recently lost his fight with cancer and passed away in Lismore Base Hospital. I would like to convey my condolences to his wife and family for their loss. I was fortunate to know Hans, and a nicer, more helpful man you could not wish to meet. His smile and laugh was infectious, and his love for all things fishing, particularly bass fishing, immeasurable. So, one last time, his smiling face shall grace the pages of BNB. Rest in peace Hans; tight lines forever.

Well that’s all from me for another year. Thank you for taking the time to read my articles during the year and I hope I have been of some help to you. A big thankyou has to go to our editor Ben and his team for the great job they do in putting together this wonderful publication. Merry Christmas and a safe holiday period to you all. I hope to see you again in 2016!

For more recent summer action from this region, click here!