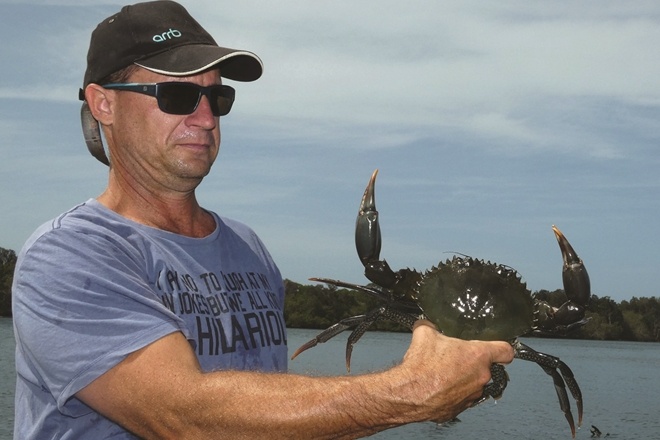 Mud crabs are beginning to move just in time for Christmas.

HEAT, humidity, mozzies biting, cicadas singing – this spells the beginning of the mangrove jack and mud crab season to me. There’s a few mud crabs on the move now but they will only improve as summer progresses.

They are in varying degrees of fullness at the moment, with some big rusty ones being caught and some green empty ones as well. Just chuck the lightweight green ones back and catch them again in a few months when they have filled out.Open borders

With the travel bans lifted and the Queensland border fully open, I reckon the place is going to go gangbusters these holidays. One thing that always amazes me is how boat traffic doesn’t seem to negatively affect the fishing too much.

Up in the shallows can be a different story, especially at night, and especially on a full moon when whiting and flathead get spooked easily. By and large though, the deeper sections of the river will still be holding good numbers of whiting this month.Open borders

Mangrove jack have been caught in excellent numbers all throughout the rivers lately. I’ve never caught too many jacks over the years by accident, and they have usually been targeted catches. Recently however, we caught one up at Condong out over the sand while looking for whiting.

As you can see in the pics, Toby is amongst them again, catching several nice trevally and a good jack. During the day a live bait is often a good option for a jack, but at night they will readily take a fresh cut bait or a good quality pilchard. Offshore all the talk is of mackerel.Open borders

The rumour mill has been in overdrive since early November, with catches being reported at Palm Beach to the north and Woody Head to the south. Here in the middle though, there has only been a few little school mackerel. It’s been an amazing year for school mackerel, with fish being caught in the river mouths and as far up as Chinderah in the Tweed.Open borders

By the time this article reaches you it would be nice to think a few spotted mackerel will be showing up from the Brunswick to Black Rock – later in January is a better bet though. Little black marlin are in the blue water out a little wider where the current has been raging.

Bottom fishing has been all but impossible in the last few weeks, with the current rarely dropping below two knots, and this is what brings us our pelagics. As soon as it starts to lick in a little closer, the mackerel will begin to appear. Out wider on the 24-50 fathom range wahoo, tuna, mahi mahi and marlin will be travelling in the current, so it might be worth a troll out there.Open borders

With domestic travel high on everyone’s list these holidays, local fishing towns will receive a much-needed economic boost. Here in Brunswick Heads you can call in and visit our tackle store right in the middle of town opposite the bakery. They’ve got you covered for all your bait and tackle requirements, as well as beach gear and more.

A short drive over the river to Billinudgel, you’ll find North Coast Yamaha for chandlery and boat bits and pieces that you may have forgotten to pack. They’ve also got a great array of lures. As far as bait goes, fresh is best, but remember if you are coming down from Queensland that cast nets are illegal in NSW.

The tackle shop in town has vacuum-packaged whole mullet and fillets, Ballina prawns, Tweed Bait and live beachworms. In the river, yabbies are going to be hard to find but you’ll still find enough for a good session on all the reliable sand banks.Open borders

Beachworms have been in good numbers on both the north and south side of town if you are handy at catching these yourself. Merry Christmas, happy new year and I hope you catch the fish you’ve been dreaming of these holidays.