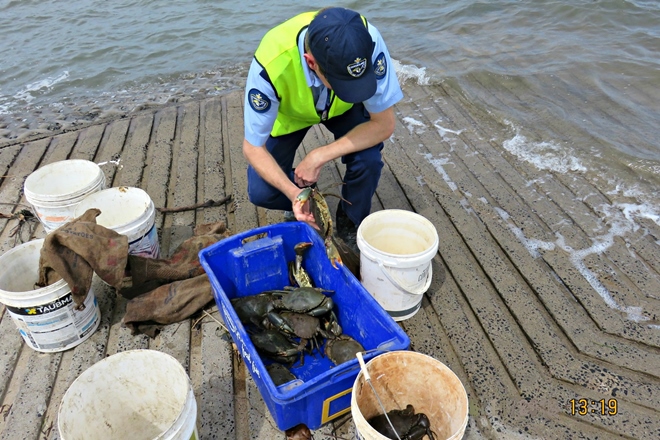 A RECREATIONAL crabber who pleaded guilty to five crab-related offences including possessing undersized and female mud crabs has been fined $3100 and ordered to forfeit his crabbing apparatus.

During sentencing in the Brisbane Magistrates’ Court, the magistrate referred to the fisher’s “greed and disregard for the future sustainability of crab stocks”. Queensland Boating and Fisheries Patrol field officer Vaughan Heath said a number of offences were detected during an operation against unlawful crabbing in the Kedron Brook floodway. “QBFP officers inspected the Brisbane fisher’s boat and found five female mud crabs, which are a no-take species in Queensland, four undersized male mud crabs, 10 excess crab pots and unmarked fishing apparatus,” Mr Heath said.

“The crabber was found in possession of a further four undersized male mud crabs during a routine patrol around the Nudgee boat ramp a number of weeks later.” Mr Heath said the court prosecution and penalty was a reminder to all fishers to follow Queensland’s rules and regulations for sustainable crab fishing. “Being a responsible crabber means using the correct number of crab pots and dillies (no more than four per person), marking them correctly and being able to identify your catch,” he said.

Under Fisheries regulations, penalties for crabbing-related offences include on-the-spot fines that range from $243 for undersized crabs and exceeding possession limits to $1219 for interfering with crabbing apparatus. Maximum penalties can exceed $120,000. Queensland Boating and Fisheries Patrol relies on the ongoing support of the community to help protect Queensland’s valuable fishing resources.

If people suspect illegal crabbing, they should report it to the Fishwatch hotline on 1800 017 116. Don’t engage the person because this can compromise an investigation. For more information on Queensland fishing rules and regulations, visit fisheries.qld.gov.au, call 13 25 23 or download the free Qld Fishing app from Apple and Google app stores. You can follow Fisheries Queensland on Facebook, Twitter and Instagram (@FisheriesQld).