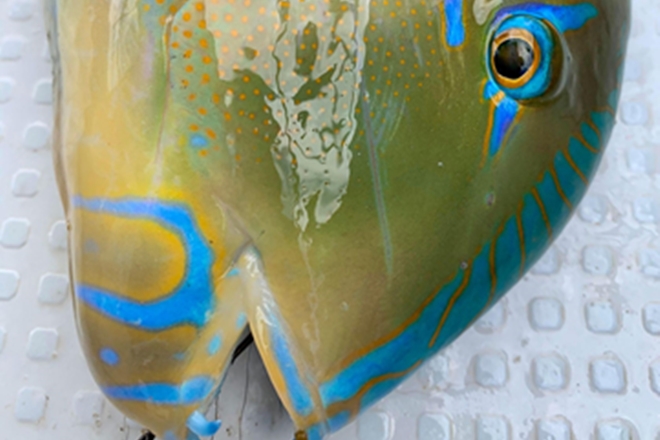 Purple tuskfish have the most spectacular colouration.

Broadwater brings the action on blades

THE Gold Coast Broadwater has been fishing remarkably well and has had a great variety of fish on the bite. School mackerel normally appear in the southern Broadwater at this time of year because they begin their annual migration from the north. I have never seen this many though – we’ve had large numbers of schoolies feeding every day for weeks now. Broadwater blades

They are voracious predators and reach 50cm – legal size – in their first year of life. You will rarely see them busting the surface, instead this fish prefer to hold near the bottom and round up baitfish. We’ve caught up to 60 a day on silver 20g and 35g Samaki Flash lures.

The best way to work them being to drop the lure straight to the bottom and then crank it to the surface as fast as you can. School mackerel are easily caught with white pilchards rigged on small gang hooks and a small ball sinker, just heavy enough to reach the bottom in 5-7m depths. Broadwater blades

Wind your bait up about a metre so your bait is visible to the pelagic mackerel. Hopefully, all the activity signals a good summer ahead for other mackerel species on the shallow offshore reef. Purple tuskfish is another species present in good numbers around the Broadwater recently, and it’s great to see so many juvenile models in reef and seagrass areas. Broadwater blades

Click here for an other interesting fish you can catch on blades.

They love attacking yabbies and small blade vibes and put up a furious fight on light tackle. They are a high-quality eating fish, though we prefer to keep only a few for a feed and release most. Active most of the time – apart from the hottest and coldest weather periods – tuskies have a 30cm minimum legal size in Queensland.

October is a month when snot weed can spoil the fishing, so keep moving to areas clear of it and you’ll find fish. It’s also a change of fishing season, with mangrove jack and sand whiting becoming more active, with live beachworms proving great bait for whiting. This month is also one of the best times to catch trevally in local rivers, and the most common species are giant, bigeye, brassy and tealeaf trevally. Broadater blades

They will readily attack lures whether small trolled hard-bodies or surface lures cast toward surface feeding fish. Early in mangrove jack season, you’ll find mullet fillets fished around bridge pylons and rock bars work well. And we can expect to catch winter whiting, squid, flathead, flounder, blue swimmer crabs and many others in the Broadwater. So, get out there with yabbies and vibes and enjoy our amazing waterways! Bradwater blades

To book on a charter with myself or Brad, or if you have any fishing related questions, SMS 0432 990 302, email fishingwithclint@gmail.com, or find us on Facebook at Brad Smith Fishing Charters.