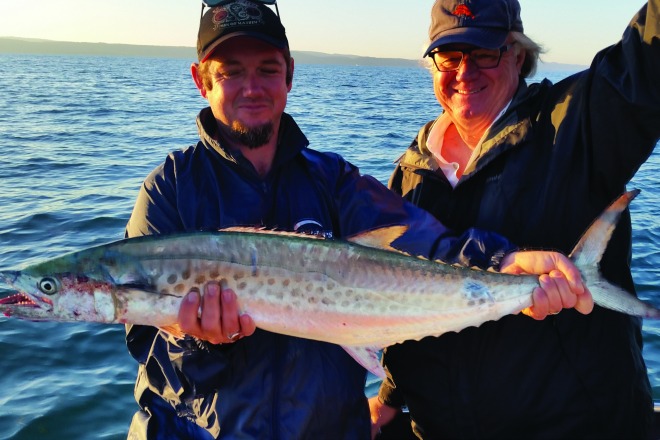 How to Catch Mackerel

THE past month’s fishing has been pretty good and we have captured all sorts of species from cod to mackerel and flathead.

I couldn’t ask for a better start to winter. The mackerel we’ve caught have been an assortment of schoolies and spotties. We have hooked them from the top end of Moreton Bay right down to the southern bay on a range of techniques from bait to plastics and trolled hard-bodies.

I have said this plenty of times before, but you need to find schools of bait. When you find the bait you will find the fish.

If you want to catch mackerel, you need to be looking for current lines out in the open bay as well as areas that will hold bait against the edges of the shallow reefs and banks around the islands. The small hidden wrecks and rubble grounds in amongst the southern bay islands are worth a look too. The wind and tide will push the bait against various points, and these points often produce mackerel.

While chasing mackerel, first we usually try to troll through the bait with some Zerek Ripper Divers. I set these lures up with a bit of wire at the end of the trace so they don’t get bitten off and then troll them at different depths, one at 3m and one at 5m to see what depth the fish are sitting at. If we haven’t had any luck on the troll we will sit over the top of the bait school and send baits down. While the baits are out we will also flick some soft plastics into them.

Mackerel are not caught on the same method every time, so keep changing your technique and hopefully you’ll come up trumps and end up with a few fish in the box.

Another species that’s been poking its head up around these bait schools and the odd isolated wreck in the southern bay is the good old cod. We were lucky enough to get a solid 80cm specimen while trolling a little wreck covered in small baitfish. In the past this is how I’ve caught a lot of jewfish as well – just trolling Zerek Ripper Divers through large bait schools around either wrecks or structure. There’s nothing wrong with those two species as by-catch.

We’ve been landing a few squirey snapper around the southern bay islands over the past month and most of these fish have come off bait around the turn of the tide. Recently we had a reasonable amount of rain in a short time and the resultant dirty water could push some of these fish further out. If so, the place to start looking for snapper through winter would be around Peel Island and further north.

However if the water stays clean and clear, the bait schools will push south and we should have a reasonable season around the bay islands, but only time will tell. This brings me to the two species I reckon will really fire over the coming months: the humble flathead and the old bream.

So far all the signs are pointing to a pretty good season on both species.

Let’s start with the bream. I’ve found the best places to find these fish are around river mouths such as the Logan and along mangrove lines. We’ve been catching bream on fresh bait, trolled hard-bodied lures and small, lightly weighted plastics cast into structure such as rocky outcrops and around pontoons and moored boats, especially the ones that have been sitting around for a while with plenty of growth on them.

Some really good-quality flathead have been around and they have been in great shape. A few rather large specimens have been about, but most are going to be about 50-70cm in length. The largest one we’ve been lucky enough to run into this season was an 87cm croc.

We’ve used a variety of techniques to catch these fish. Good fresh bait such as herring, pilchards and mullet strips have worked really well, as have lightly weighted soft plastics cast at drains and mangrove lines. Trolling little hard-bodies such as Zerek Tango Shads in 1-1.5m of water has enticed plenty of flathead.

One of the standouts techniques is casting Zerek Fish Traps and gently working them across the bottom. These little lures emit plenty of vibration, and a technique involving small lifts producing plenty of vibration and then dropping the lure back to the bottom accounted for our biggest fish and then two casts later a very respectable 72cm model.

Don’t go past casting some of these soft vibes because they seem to be stirring the fish up at the moment. Well that’s it for this month. Don’t forget, if you want to learn more about these techniques and chasing fish in Moreton Bay, we don’t only provide fishing charters but also fishing tuition and theory classes at night from my house. So if you’re interested, just give me a ring on 0433 732 310 and I can definitely sort something out for you.

Otherwise, check out the Moreton Bay Charters Facebook page or visit www.moretonbaycharters.com.au Until next month, stay safe on the water.