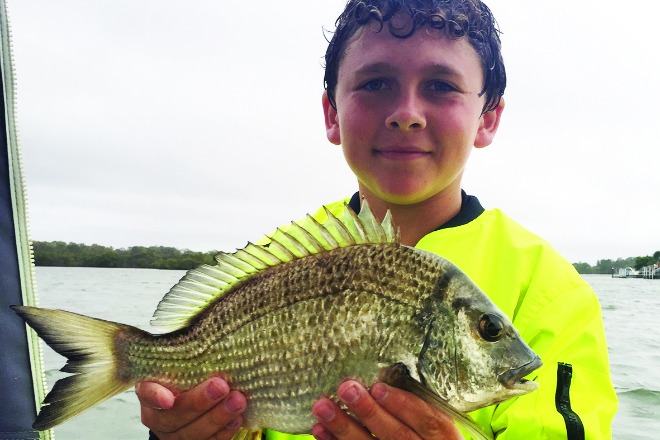 IT’S somewhat disheartening when work and illness keep you away from the water and even more so when the first weekend you get back, there’s a massive low-pressure system with rainfall up to 200mm and strong wind expected.

It was our intention to enter as our first competition as a family because we missed last year’s event due to poor weather as well. With potentially dangerous conditions forecast, at best we’d have been fishing in a creek or area protected by the wind.

However, in an open boat the torrential rain would have been horrid, and with our two little ones just recovering from colds and coughs, we decided to pull the pin. I was actually quite content to stay at home and spend some time catching up on chores, however my Flathead Classic teammate Kord Luckus from Wilson Fishing had other ideas.

He was ultra keen on fishing the competition with his son Cade and as he had managed to scam the use of Troy Dixon’s vessel (thanks Dicko!), he had protection from the weather. And of course he wanted me to come along.

So the Friday before the competition, I left home with Leeann shaking her head and calling me a “mad bugger” to go and dig worms on the Gold Coast in preparation for an early start the following morning. With rain falling Saturday morning, I didn’t exactly jump out of bed with excitement. In fact, I met with Kord and Cade and we had a leisurely breakfast and coffee while waiting for the sun to rise before packing our gear into the boat and launching into the Coomera River.

As forecast, it was horrible, particularly when the wind blew straight up the river into the back of the boat, and with it, the horizontal rain. I wasn’t expecting great things as often such pressure systems can turn the fish off the bite, however I was pleasantly surprised when a few quality whiting started making their way into the boat. We fished the usual way, with rods laying on the transom and in the holders, but with the wind howling it was impossible to use the second anchor to hold such a big boat steady.

As with most of my whiting sessions, we used both the Gary Howard Club Special light surf rods teamed with Alvey reels and light line. Also in the arsenal were light threadline rod and reel combinations from Wilson Fishing spooled with light braid. Regular bites from the whiting were more than welcome and it wasn’t long before we had a 40cm whiting in the boat.

In this particular competition, any fish over 40cm can win a prize, with the angler bringing in the longest fish earning first prize and the remaining anglers going into the ‘40cm Club’ and earning the chance to have their name drawn from a hat to win cash and prizes.

Cade was fishing the junior section and managed to catch a beautiful big bream. He was a pleasure to fish with and with such inclement weather being thrown at him, he did well to make it through the session.

We mostly fished the edges of sandbanks and wherever we could find a spot that offered some protection from the wind along with a good chance of catching more fish. After boating a few more whiting and whinging about the really crappy weather, it was time to call it a day and make it to Redland Bay for that afternoon’s weigh-in and prize draws.

Keeping my fish in an ice slurry to ensure it didn’t shrink too much before the weigh-in, I was happy to have the fish measure in at 40cm. That meant I’d be in for a chance of a prize the following day if my name was drawn from the hat. The biggest whiting that afternoon was a beautiful 42cm fish but I doubted whether that would win the competition.

Kord, Cade and I decided to give the fishing a miss that evening because the weather was still pretty ordinary and we happily made our way back to our nice warm and dry homes. We had a sleep-in on Sunday, and then cleaned up the fishing tackle and filleted the whiting before venturing to the competition activities that afternoon. Interestingly, the stomach contents of the fish revealed they’d been feasting on yabbies.

It had been some years since Leeann and I had fished one of the RBAFC’s competitions and we were pleasantly surprised at how well it was run and just how family orientated it was.


The kids were really well looked after and plenty of prizes were on offer for all in attendance.

One of the best ideas at the competition is giving every competitor a chance of winning the major boat prize through a random lucky draw. Competitors’ numbers are drawn at the Friday briefing as well as the Saturday and Sunday weigh-ins and the person whose name is drawn then has 60 seconds to get up on stage to be in for a chance of winning the boat. All competitors drawn out over the three days go up on stage on Sunday and are guaranteed a prize, however the very last name drawn wins the major prize.

This is by far the best way of giving away a major prize due to the unfortunate fact that some anglers cheat by fishing prior to the comp, catching their fish in areas they shouldn’t be fishing and sometimes feeding up the fish in a tank at home.

Unfortunately I didn’t win any prizes, with the longest whiting measuring in at 43.5cm, but I was very impressed with the fast flow of the competition formalities. The RBAFC did a fabulous job in very trying conditions and I must congratulate the members on such a great competition.

We are ultra keen to fish this competition next year and are already praying for some good weather.