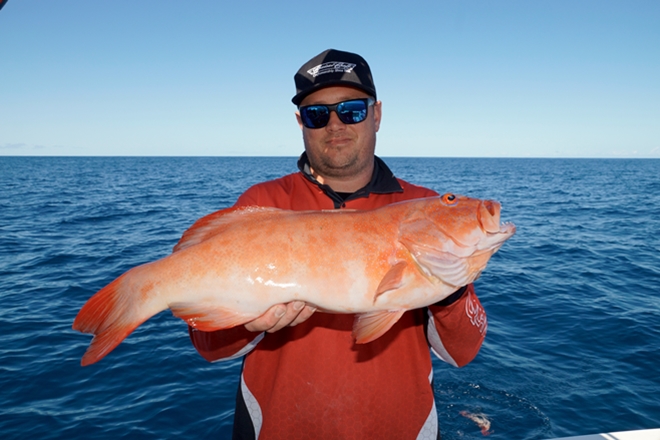 Trying new things on the reef at Turkey Beach

AFTER our Swains sortie, George and I decided to head to Turkey Beach for an overnight fishing trip because we hadn’t fished that region since October last year. Weather, circumstances and other commitments kept getting in the way and unlike many other fishers, we chose not to fish the area during the COVID-19 lockdown good weather, when social distancing and travel radius from home restrictions applied. Turkey Beach Reef

Because the snapper and pearl perch closure was still in effect, we decided to focus on closer reefs to try stuff we don’t normally try – and not venture out to the wider ledges we prefer. This was our effort to minimise the likelihood of catching snapper and pearlies, and as it turned out it was a good choice.

As our start point, we stopped at the ‘outer wides’ and worked patches of rubbly broken bottom on the eastern side – there were good fish in the icebox from the very first drop. A little run in the current meant it was a struggle to keep bait close to the bottom, so I was surprised when my first drop of the day resulted in a double hook-up of a good tuskfish and a very respectable coral trout. Turkey Beach Reef

George and our friend Luke were doing well too, and eventually we were harassed by red emperor within a centimetre or so of legal size – uncharacteristically, there were stacks of this fast-growing and resilient species. With a good feed of fish in the box we headed off and steered in a northeast direction, sticking to the theme of doing what we don’t normally do.

We travelled over a lot of flat barren bottom until we found the smallest rise with hints of life and growth on the sounder. Rather than sound around and potentially spook any fish in residence, we started a drift up-current and dropped our rigs to test the water. And just like that, George pulled up a cracking grass sweetlip around 6-7kg that made the old broomstick bend and the 925 Alvey load up. Turkey Beach Reef

A few people knock the concept of an older rod and reel combination, but it worked so well for George, and because he consistently pulls so many big fish with it, why fix what isn’t broken? After a few drifts over this location for several stonker tuskfish and mixed species, we moved about to find more low-profile rises of hard bottom, with a couple yielding more nice fish.

Quite a few kilometres further on and by only watching the sounders, we ran over more patches of rubble and one drift yielded a cracking red emperor for me and a ripping coral trout for George. These fish were hanging close to a vertical patch of bait, so we hung around for a while. George and I were having a good day and were beginning to think Luke was intimidated in our company, but he kept chipping away and quietly contributed to the box. Turkey Beach Reef

The one thing that helped find these small isolated pieces of bottom was the dual-frequency transducer on the Lowrance HDS. Set to a broader manual range and zoomed in several times to a small window of about 12m on the screen in 200 kHz, the 20-degree cone angle was lighting up the screen every time we went over isolated rubble. Not only was the view of the seabed widened considerably, the bits of growth on top of the seabed were very clearly visible.

Now, I’m not knocking my Furuno 587 stand-alone – which performs very well in deeper water – but the 1kW narrow beam through-hull transducer has a cone that’s far too narrow to perform comparably in shallow water. If it was the standard P66 600W transom-mount, it would have been a different story. On one of our first trips to Turkey Beach, we managed quite a few good red emperor on the eastern side of Lamont Reef, so we headed there for a try.

We had no luck with big model reds, though we hooked stacks of the larger but still undersized specimens, and a few other species for the icebox. After that, it was up to the inside of Sykes Reef to explore that area more. Redthroat emperor, tuskfish and coral cod made up the bulk of the catch, with an occasional coral trout. After an overnight at Sykes Reef and a good sleep, we were energised and couldn’t resist breaking the trip theme by heading east to a deeper ridge in search of bigger fish. Turkey Beach Reef

George pulled a pearl perch around the 60cm range, which went back, and I scored one slightly over 50cm that also had to go back. Though George’s large goldband snapper made up for the returned pearlies, we got back on track with the game plan and worked our way back to Sykes – putting in time and effort to fish parts of the reef we hadn’t fished before. I’m so glad we did, because trout were hitting hard and the icebox glowed with distinct shades of orange and red.

Luke changed his gear from the previous day so that all three of us were fishing light outfits on spin reels, using the smallest amount of weight to get to where the trout were most active. Eventually, we had a good fill of excellent fish and headed home via the pieces of broken ground we’d fished the day before – to see what they would offer. While we didn’t catch more big reds, we landed a few big grassies and tuskfish, which rounded out a great trip. For us, doing what we don’t normally do worked a treat, so the next trip will be a toss-up between travelling to the further grounds we like or sticking in close. Turkey Beach Reef

We like the thrill of the chase and the fun it puts into fishing.

Bill has been spearfishing, fishing and surfing for all his adult life and now runs a business specialising in teaching people how to cross coastal bars and fish offshore. He also runs charters for people who fish for the right reasons and whose company Bill thinks he will enjoy. He’s been running his bar crossing business successfully since 1996 and hopes to continue doing so for years to come as he grows old disgracefully.
Previous Broadwater brings the action on blades
Next Fishing therapy in Cape York