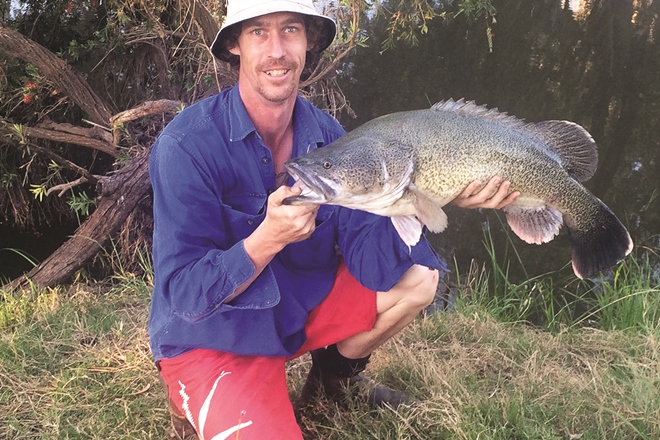 Local cod hunter Scotty Vlietstra scored a cod from a small water haven by casting lures from the bank.

THE Darling Downs is an area where large lakes and skinny waters require different fishing tactics over the cooler seasons.

Creeks and rivers tend to present more active cod in summer while for me the impoundments such as Cooby, Coolmunda, Leslie and Connolly dams have provided more instances of anglers frequently catching Murray cod in winter.

The skinny waters of the Condamine River and Oakey Creek hold active cod in summer, while the western rivers I visit on the border country including the Macintyre, Barwon and Weir occasionally yield decent numbers of cod in winter.

Spinnerbaits can be worth their weight in gold on the Downs skinny waters, though on the Border Rivers, live baits such as worms and yabbies tend to outshine artificial deceivers. Connolly Dam is a regular destination of mine during autumn.

Using yabbies and trolling with larger deep-diving lures tend to be the more successful methods.

Connolly is usually the first of the dams to turn on the charm once the weather cools, which I believe may be due to its smaller capacity. The bigger the body of water, the longer it takes to cool, and Connolly is only a 2590ML waterhole – nine times smaller than Cooby Dam, which is the second smallest on the Downs at 23,100ML.

I usually leave Coolmunda and Leslie dams until mid-winter, though a lot of cod catches are recorded by other anglers during midsummer excursions. Leslie has long been a dam suited to lures, and lures definitely present the best way to hook up with a Leslie Dam cod.

Trolling the lake is an integral part of angling here. Local lure makers once flourished in backyard sheds during the 1980s, and if your design caught fish at Leslie, you were going to sell a heap of lures. Depending on the water level, autumn can be a good time for luring on Leslie.

Not much has changed since those early days and the lake is regularly stocked. Golden perch are the mainstay species while cod are a bonus to the day’s catch. Coolmunda Dam has shown some odd fishing traits on past trips. The cool waters of May saw shrimp as the number-one fish enticer, while in deep winter when an oxy torch was required to separate butt cheeks from an aluminium seat, dark lures worked better than live bait.

I found this unique because a fish’s metabolism usually slows to a crawl in very cold water conditions and it will be more likely to take bait than lures.

Kayaks are usually my watercraft of choice wherever I may be fishing, except on extended angling trips or if I go fishing with a larger group. I’m surprised by the number of hardened boaties on the Downs who have converted to paddle power. Their main reasons for doing so are not having to pay boat and trailer regos or insurance. My reasons are small water manoeuvrability, ease of maintenance, quick deployment and greater access options.

So remember: the cooler seasons on the Downs don’t need to signify the end of good fishing – more like the beginning of big fish encounters.

Still time for a tailor in Queensland

FOR all varieties of angler, Central Queensland covers most of your fishing options, goals and …