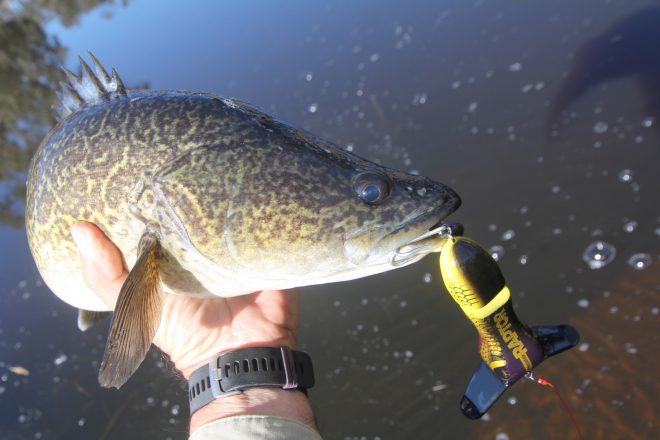 The 100mm Raptor big enough to tempt larger Murray cod, but smaller cod will also happily crash this Aussie-made paddler off the surface.

New for the winter cod season

SINCE their first-hand carved 80mm timber Boomerang lures were revealed to the angling world 37 years ago, the team at Predatek (formerly Downunder) Lures has earned an enviable reputation for developing outstandingly effective lure designs. During the industry-wide sales slump of the initial Covid lockdowns in early 2020, the design team used this downtime wisely and turned their skills to building a better mid-sized surface lure than the largely imported offerings available.

Pitfalls of existing designs were each addressed to overcome the issues with castability, fragility and poor hydrodynamics and acoustics common among imports. The result was not one, but a range of superb paddling surface lures that exhibit remarkable actions on the water, as impressive to anglers as much as they are appealing to fish. winter cod

All three sizes in the new range, 45mm Kricket, 60mm Bass Bug and 90mm Cod Bug have proven effective on all the usual surface lure targets in temperate and tropical waters during the short time they’ve been on the market. These lures filled the niche between the existing paddlers in the Predatek stable, the ultra-lightweight Spaddlers and the heavy hitter of the range, the 110mm Jabberwok.winter cod

Continuing with the theme and momentum is the latest release from the Port Macquarie-based lure manufacturers. Just released, in perfect timing for the current winter big cod season on the western lakes is the 100mm Raptor, a large paddler aimed squarely at the green fish of the Murray. Why another cod paddler? Some anglers may find the Jabberwok, at 52g a little fatiguing on the wrist after extended hours of casting with a single-handed rod.winter cod

The new Raptor is 20 percent lighter at 40g, and more aerodynamic, allowing for distance casts to be achieved with less effort. True to its pedigree, the Raptor casts cleanly with no tumbling in flight, lands right side up and commences paddling at the slightest forward movement. The articulated body gives the lure a wide, swaying motion with plenty of body roll, even on a dead-slow retrieve.winter cod

Attention grabbing acoustics and a practical range of colours from attractors to natural hues make the Raptor the complete fish-fooling package. During the brief time I’ve spent on cod water with the Raptor, it brought fish from the depths and enticed strikes in spite of painfully low water temperatures in the small streams I fished. Although the Raptor definitely represents a large enough meal to tempt the largest of impoundment cod, it appeals to the smaller-sized, average stream dwelling fish too.winter cod

Check out the Pretadtek website for online purchases, news and to report your captures on their lures. Visit predatek.com