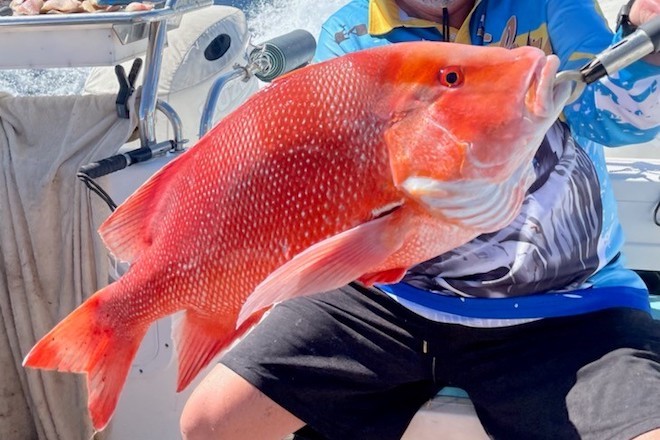 Big reds were the highlight of the day, and Rob was happy with this one.

A WEEKEND with a good weather window is rare these days to say the least, and with Bernie putting out the feelers to see if anyone was fishing out of Rainbow, a plan was put in place to make it happen. Pete and Zac Rimmer, with deckie Ian, were taking Dilligaf up, so Helaine and commodore Rob jumped on with John Hooker on Freyja to make it a decent trip.

The weather was looking pretty good, so John made the call to head wide, starting about 80km northeast, while Pete was heading more north towards the Maheno bommie. Bernie elected to fish closer, and when you look at the travel times versus time in the water fishing, then it wasn’t a bad plan. They all met at the bar and logged on with the coastguard with a return time of 1700. Rainbow Beach weather

Fishermans Gutter was quite passive on the day as they headed towards the sun. H was starting to look for Noumea when finally the motors slowed and the crew began looking for fish to drop on. John eventually found a nice rock with a show, and it was all hands on deck as the lines were deployed. Expectations were high and despite plenty of good bites, no real cracker fish were coming up.Rainbow Beach weather

They sounded around some more and found another show that John called for reds, so out came the big baits to be dropped on the targets. H got a good hit, with the fish growing in size as the fight went on and it pulled her around the motor on the back platform. After a bit more dancing around, H called for Rob to grab the net just as his rod buckled over in the rod holder.Rainbow Beach weather

A grunt from the other side of the boat indicated John was on solid too, with pandemonium reigning supreme for the next few minutes, but despite the chaos all fish were landed.  H bagged a nice red at 7.2kg, with Rob’s just a tad under, and John landed a red throat. With three quality fish on the first drift, it was straight back to try again.Rainbow Beach weather

The next drop Rob had the typical red bite, with the fish mouthing the mullet fillet. Once there was weight, the hooks were set and after a short battle another red hit the net. This one wasn’t as big as H’s, but at 5.8kg he was a happy boy. They again went back to get one for John, but unfortunately nothing arose. They did hook a few more that were possibly reds, but anything that took line was taken by sharks as they moved in for a free feed.Rainbow Beach weather