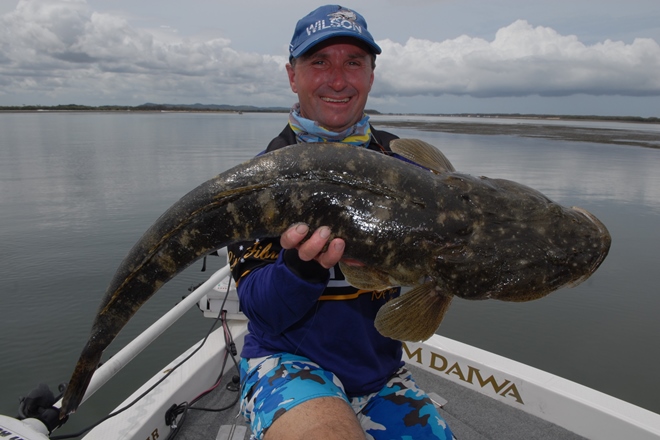 Rob landed this 92cm flathead, giving him an unbelievable two fish over 90cm in one day. Perfect timing for a competition.

FOR only the third time since our daughter was born four and a half years ago, Robert and I managed a day on the water together without kids.

I must be somewhat a lucky charm because each time the kids are left at home and I fish, we tend to experience one of those days that will be remembered for a lifetime. Kord Lucas from Wilson Fishing suggested that Robert fish the Gold Coast Sportfishing Club’s Dash for Cash, and two days before the event I was delegated to the position of team Wilson’s third member. The Dash for Cash is an event in which teams fish for one day to land the longest five fish possible. The length of fish equals the points awarded, so a 40cm fish equals 40 points, a 53cm fish equals 53 points and so on. Teams must then return to the starting point on time otherwise risk losing points for every minute they are late.

On the morning, the 25 teams fishing the event congregated under cloudy skies at the volunteer marine rescue property on the Southport Spit to register and pick up their ‘tags’ that would be used throughout the event. Rob picked out number seven, which would indeed prove a lucky number for our team. The teams were called out in numerical order so the boats could leave in an orderly fashion. We all motored slowly through the moored boats before gunning it to our fishing destinations, mostly towards Jumpinpin in the north. We just missed the change of tide, however our deepwater drift along the edge of South Stradbroke provided a reasonable start. The tide wasn’t roaring out and with a perfect drift we concentrated our efforts on jigging Zerek Fish Trap lures along the snaggy bottom. Kord also cast in among the timber on the bank with an unweighted Fish Trap. He landed a lovely 63cm fish as his lure wafted through the water column while my 41cm flathead from the deep was photographed and both were noted towards our five fish tally (anything 40cm and above could go towards the score).

After a few more lazy bumps from flathead without hooking up, we decided to give the drop-off along Crusoe Island a cast. The fishing was ordinary to say the least, however a 67cm flatty was added to the points. After trolling the bank we motored across to the shallows of South Stradbroke Island. The tide was dropping and water was flowing from the banks, which was ideal for flathead fishing. This area was perfect, with bait flicking and birds working. Team Wilson was ready for action and we started ticking over our five fish tally on a combination of trolled Zerek Tango Shads and Lively Lures Micro Mullets.

For the competition we used Wilson Magnum 6’10” two-piece spin rods that cast lures like a dream, were light, had great sensitivity and balanced perfectly with a 2500-size reel spooled with 12lb Mustad Wish braid. Robert went against the grain and changed to a Venom Deepinatration rod (Kord and Rob have been working on this Venom blank for a while and hopefully it will be available in the near future) and tied on a Zerek Fish Trap; a lure that could be called rather unusual for the circumstances at hand. As we trolled, Rob occasionally bumped the motor out of gear, allowing his lure to sink before pushing the controls back into gear for the lures to swim again.

We were catching plenty of small fish and commented that there’d have to be a big girl down there somewhere getting in on the action. The hit from the fish was hard and unexpected and as it swam towards the boat, Robert raced forward so as to not give it any slack line. The weight of the fish was felt immediately through the line as the flathead raced towards the shallows, along the bank several times and made a number of good runs before the monstrous fish came into view. It was certainly one of the bigger flathead we had all seen but it wasn’t coming in easily. Kord made several attempts with the net but the big girl made it difficult with its sheer girth and major attitude. Kord then extended the handle of the net (a Wilson model of course) and hey presto. The big fish was still a handful but Kord finally got her in the boat.

It’s such an exciting experience but an oh-so nerve-wracking one when big fish are hooked, and this one measured in at 95cm, which was Rob’s second-largest flathead to date. Our points tally received a major boost and we continued in the area until the fishing slowed. The decision was made to fish to the south and we trolled into a shallow area that has provided us with some good catches in the past. There was one other boat casting there and its occupants were ticking away at the numbers but weren’t coming up with the size.

Plenty of legal, though small flathead, a stingray and stargazer were trolled up for us, however it was the smaller fish that kept us plugging away in the area with the possibility of finding another big girl. It turned out our prediction was correct and once again Rob hooked up to a large fish that took a hell of a lot of line to begin with and made its way up to the edge of the bank.

It was another big flathead and this time Kord managed a great net shot with the handle extended first time. At 92cm it was Rob’s fourth-largest flathead and we were all fairly happy, particularly as the fish had engulfed the lure.

On inspecting the leader it didn’t have a scuff mark on it, which was surprising because flathead have a nasty trait of scuffing through leader material with their raspy jaws. SureCatch fluorocarbon invisible leader in 10lb was the material of choice. With good flatty anglers fishing in the other teams, we thought it would be quite close and it turned out had we not landed that big fish, we would have come second by one point.

Team Wilson came in first with five fish measuring to 373 points (95cm, 92cm, 67cm, 63cm and 56cm). Thanks to the Gold Coast Sportfishing Club for putting on another well-run competition.

With the holiday season upon us, the best tip is to fish very early in the morning or late in the afternoon and into the night to avoid boat traffic, boat ramp chaos and the heat. If fishing for flathead, large amounts of boat traffic will turn the fish off the bite, so if fishing the shallows, do so away from the main channels. Also take care and ensure your vehicle, boat and motor are serviced and in good running order for any adventures that lay ahead.

A merry Fishmas to you all!

Leeann Payne has been writing for magazines for over 20 years and specialises in beach, estuarine and fly fishing. She has fished around Australia and has caught a large variety of species from marlin, sailfish, bonefish and barra on fly tackle to reef, pelagics and impoundment species.
Previous Travelling Stock Reserves Locking Fishers Out
Next Stop the Glare With BluBlocker Sunglasses