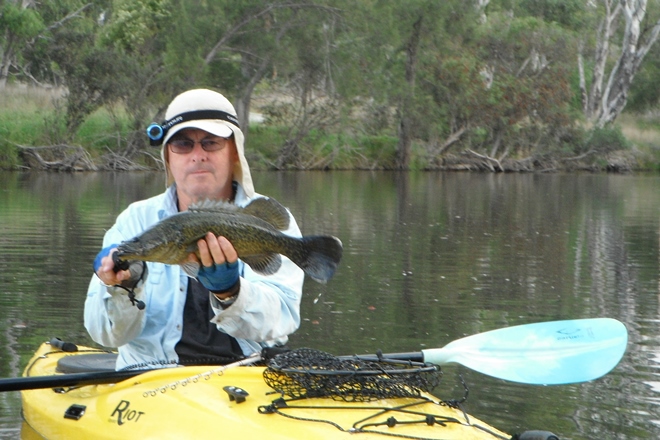 Beautiful locations holding Murray cod will be rendered inaccessible if nothing is done and Travelling Stock Reserves are closed off to the public. Pat Lollback captured this cod prior to the September 1 to November 30 closed season.

LOOKING back over 25 years of what I would class as the better part of my life as an angler who throws bits of coloured wood into freshwater streams, I have had a ball.

I’ve had the good fortune to meet many people who have ventured out to my neck of the woods. I have seen them several times because they keep coming back to fish Glenlyon Dam in the hope of catching their dream fish. While I love to fish Glenlyon, it is not the be all and end all of my fishing. This is mainly because I need to get the hand brake off whenever I go to fish the dam.

On the other side of the coin, if possible I love to fish the local rivers. Given that the top end of the Darling River system is without a doubt a wonderful place to fish, I am blessed with many options to choose from. These include the Severn Rivers, Mole River, Tenterfield Creek, Deepwater River, Beardy Waters, Beardy River, Bluff River, Dumaresq River, Macintyre River, Macintyre Brook and I may have missed a few. Not to mention the eastern side and its river systems that run into the Clarence River system – blessed eh!

One thing I want you to think about is access, access, access. In NSW and the northern New England regions both east and west of the Great Divide changes are afoot to the leasing of Travelling Stock Reserves.

These changes are being proposed by NSW Local Land Services. TSRs give you access to local beaches and swimming holes as we know them. The current lease for each of these runs for five years up to 2020.

From then, other options will be opened up for local landholders and graziers whose properties are next door to these reserves. It is this second stage that concerns me, five years down the track. This should be looked at very closely by all anglers who are keen to fish the rivers because I am concerned about access in years to come. Other groups who should have a say about these changes include bird watchers, wildflower groups, nature observation groups, native tree and shrub seed collectors, the local public and even kids.


We all need to let the authorities know how we still require access to these locations throughout NSW.

Make sure you have your say by December 5 by visiting www.lls.nsw.gov.au

Be advised the 41-page local strategic plan for the Northern Tablelands reads like a Hans Christian Andersen story. There are no maps on the TSRs and no maps on the crown land locations. In fact you are supposed to make comment without any reference to locations that you would like to be kept open. To be truthful it is a bloody shambles, with no locations of river access mentioned, nor for that fact any other reserve locations.

The NSW State Government should be ashamed of what has been put forward to date and it has a lot to answer for. Local state government elections may be the current government’s downfall. NSW might stand for Newcastle, Sydney, Wollongong, but as you go west of the Great Divide you’ll soon find a lot of bush beaches being closed off. In fact, locks are already being put on reserve gates out my way.

In closing out 2015 I would like to wish all the best to the readers of Bush ‘n Beach. Merry Christmas to Ben and the gang at BNB and to you the loyal reader. Debbie would like to wish you all a merry Christmas as well and give many thanks to the lure makers because she loves to collect them; not use them as I would. Enjoy your Christmas Day, Boxing Day and New Year’s Day on bush beaches west of the Divide – soon there may not be many left.