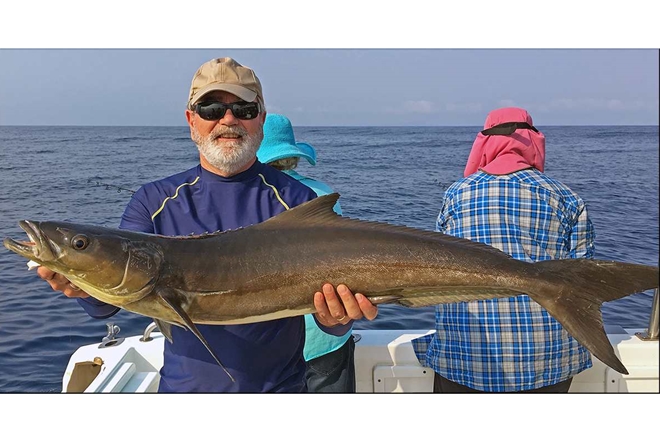 Things have started to warm up this week. Offshore there has been some increased pelagic action and reports of Spanish have started to trickle through. We have seen fish to 6KG and some cracking dolphin fish well over meter mark. There have been a few mac tuna schooling up, so lets hope we see some action arriving soon. Fraser Island has good numbers of Mac Tuna and the spotty mackerel are showing up in numbers so keep an eye out if offshore for birds and have a slug ready to cast.

We’ve seen Double Island producing the goods, with the local charters cleaning up on solid goldband snapper, big pearlies and some cracker cobia too! North reef has been the pick of the spots for the offshore crew with smaller snapper, solid pearlies, big cobia and jewfish. There have been some bite offs from mackerel sitting down deep in this area but nothing has come on board. While we have lighter winds drifting a patch of ground with a Shimano wonderfall 80-100 gram jig is a great way to find the big reef fish. All of the previously mentioned species will inhale a well presented jig and these are very user friendly. For the best presentation use 30lb braid and no more than 40lb leader and around 3 meters. For bait fisho’s squid and pilchard baits are working very well, especially on Chicko’s reef rig. Sunshine reef continues to have smaller snapper, sweetlip, pearl perch and cobia. It looks like we will have a solid run of cobia again so have a good selection of 5-7 inch soft plastics and 4/0-6/0 jig heads ranging in weight from 3/8th to 1oz. Proven colours are pearl white, nuclear chicken and pink pearl or similar.

Surf fishing has been slower through the week but the lead up to the new moon phase next week sees evening high tides and no light which means bigger fish will come into the shallows to hunt. Reports of worms along the beaches will certainly be an enticing thought for bigger bottom feeding fish so pick a gutter and have some fresh baits ready. During the daytime small dart continue to feature heavily. These fish can be caught on almost any bait from worms to pippies and are light tackle angling at their best.

In the river the trevally are lively with chunky GT’s and big eyes getting caught on surface and soft plastics. Another option is to use soft vibes like the Samaki vibelicious around areas of sand and rock where jack are known to hang out. These can be cast, counted down, and burned out for a strong reaction bite. These can also be slow trolled over the same areas and one great area would be between the lakes along the various drop offs, deep holes and rock bars. Elsewhere the lower estuary is still featuring some solid flathead and a few big whiting. Flatties have a liking to whole fish baits drifted along in the current on light gauge gang hooks. If fishing for whiting and in a boat have a look around Makepeace Island and the mouth of Lake Cooroibah. There are some great flats sections in these spots that can produce some solid fish.

The freshwater has seen Lake Mac Donald open again after the recent bush fires. We have seen some chunky bass just over the 45cm mark hitting a variety of suspending lures cast or trolled along the weed edges.  Borumba has a mixed bag of yellow belly, bass and toga taking a wide range of lures with slow trolled spinner baits working well. Be on the water early during the holidays to beat the heat and the boats and as always navigate with care through the timer sections.

Now for all the  latest information log onto www.fishingnoosa.com.au for up to date bar and fishing reports, don’t forget to drop into Davo’s Tackle World, Davo’s Boating and Outdoors in Noosa and  Davo’s Northshore Bait & Tackle in Marcoola for all the right equipment, bait and advice to get you catching. Be sure to follow us on Facebook and remember Tight Lines and Bent Spines! Double Island producing Double Island producing