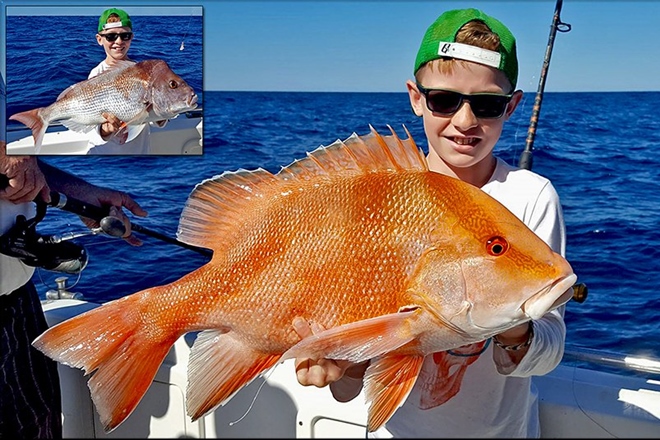 Young Toby from Palmerston in the ACT with a red emperor and a quality snapper.

Get out early for the best fish around Noosa

Time to toughen up and get yourself out early to make the most of the fantastic conditions we have been experiencing. In the river; flathead have been thick over the last month, with Weyba creek, the Sand bars near the mouth and of course the lakes all producing great fish. Smaller fish bait like small pilchards, white bait and hardy heads on smaller ganged hooks have been the go to bait. Soft plastics have also been dynamite on the flatties with the Bio Tough range from Squidgy all the rage. Angers have reported that the slow roll across the bottom seems to be the best retrieve. Trevally have also been the big news with plenty of good sized golden big eye and giant trevally caught on lures mornings and late afternoons in Woods Bay, the back of the Noosa Sound and the top of the Tewantin ski run. Working the surface has been the approach so lures like the Duo Bio Realis pencils or the Nomad 50mm Chug Norris have been perfect for the job. Big tailor are also on the prowl inside the river mouth and around to Woods Bays at night, try pillies on a ganged hook rig, fished unweighted and worked back very slowly. Plenty of whiting have also been on offer with some good fish landed around the frying pan and along the dog beach, as usual peeled prawns, worms and those freshly pumped yabbies have been the best baits for these amazing table fish.

With some very special offshore conditions over weekend anglers have made their way out in pursuit of some bigger snapper. With the wind blowing mostly offshore for the weekend anglers tended to stay within sight of the shore to get the best conditions, North Reef has been worth a look with nice snapper sweetlip tuskies and some thumper cobia. Chardon’s Reef has also produced snapper and sweetlip while close in on Sunshine Reef you can expect mostly squire sized snapper, sweet lip, moses perch and maybe a coral trout. There have been plenty of good jewies taken from most of the reefs along the coast with fish well over the 10kg being caught. For those that have been doing the run out to the Barwon Banks there have been plenty of quality fish on offer, large pearl perch, snapper, cobia, mori cod, kingies and amberjack have all hit the decks. On the pelagic side of things there are still some good tuna, spanish mackerel, spotted mackerel and school mackeral to be had with plenty on offer around Jew Sholes and Sunshine Reef.

On the beaches; Sunshine and Sunrise beaches have been doing well in the early evening with big bream, tarwhine and tailor all on the chew. Tailor are starting to come on with some good captures coming from Teewah camping grounds north and the southern beaches around Coolum. The bigger tailor are still on their way but as the weather and water cools we should see some good fish taken with the morning and afternoon tides the prime bite.  Good bream are also in the mix with plenty of larger breeding fish just about to spawn. Whiting have also been in numbers with plenty of fish on offer on the run out tide. Dart are still everywhere with the larger fish taken at the top of the tide.

In the Fresh Water; Lake Macdonald continues to fish well with plenty of bass around the weed edges, as the water cools these fish will move to the deeper parts of the dam. Small diving lures on the troll should see a result. For those casting at the edges surfaces walkers and frog profiles have also excited the saratoga with some good sized fish taken. In Borumba the timber is where most of the action has been happening, fishing Bassman spinnerbaits close to structure has been the way to go.