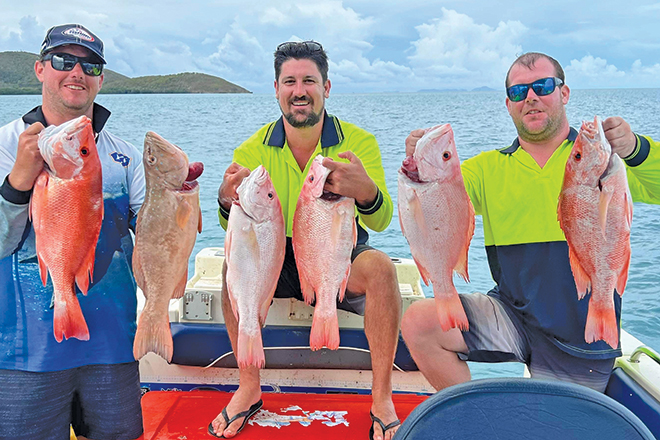 After 12 years of living and working in the Torres Strait, a job opportunity came up at the end of 2021 and so my wife and I made the decision to move back to Bundaberg, to be closer to family. Torres Strait trip

It was all very last minute, so the rush was on to pack up our lives, book everything with the barge company and of course sneak in one last fish. Torres Strait trip

It is fair to say that over the years, we certainly didn’t hold back exploring and fishing as much as we could around Cape York and the Torres Strait, with many great memories and memorable catches. Torres Strait trip

For the final trip, a couple of friends came up to Thursday Island and we headed east for a few days, as the doldrums had arrived and there was not a breath of wind.

We took a friend’s 7m Haines Hunter with a new 300hp Suzuki for this sortie.

With loads of extra fuel and camping gear, we were initially concerned with how much weight we were carrying.

However, the dual propellers on the big 300hp punched the Haines straight out of the hole and we were on our way to a remote coral cay in glorious conditions.

There were a few isolated storms about, but nothing was of concern over the three days, with conditions remaining glassy for most of the trip.

On a couple of occasions, we ducked back into the shelter of the cay, cooked up a feed, had a swim and waited for the storm to pass.

This was fine by us as we were keen to have a break and take in the amazing location and crystal-clear waters.

Over the three days, we planned to fish mostly rubbly shoals and a couple of wrecks in depths of between 25m and 35m.

The goal each trip is to always try and find a couple of new marks while checking out a couple of old ones.

We arrived at our base camp, unloaded our gear and headed straight back out.

The fishing was red hot with large-mouth nannygai, fingermark, tuskfish, coral trout and spanish mackerel making their way into the Esky.

Kale has been coming on these annual trips for a number of years and always has a list of fish he wants to catch… yes, no pressure.

This time he was set on bagging a solid cobia.

Like any good friend, it brought me great joy to catch one in front of him.

I hooked a second cobia but, not surprisingly, Kale somehow managed to gaff the hook out of its mouth at the side of the boat, which the crew reminded him of for the rest of the trip.

There were plenty of good vibes and banter getting around as we clocked up the miles searching for ground and dropping on impressive sounder shows.

We blew our chance at a trophy red emperor because the net was under a heap of gear in the cabin and, as Mark waited for what must have seemed like an eternity for one of us to net it, it pulled the hook and swam away.

We fished on for the next couple of days using slabs of mackerel for bait on 80lb paternoster rigs with a 10/0 or 12/0 Mustad Big Gun hook, which was certainly doing the damage with some nice fish coming over the side.

The fishos were keen to change it up and do a bit of micro jigging but it was difficult to get past the huge schools of golden and brassy trevally.

The fish seemed to fire up more on the mornings that had a bit of current, with the afternoons being a bit tougher without much run.

Again, this suited us because we were at our base camp kicking back with a beverage around the fire as the sun began to set.

It had been an epic three days and we couldn’t have asked for better weather.

On the way home, we hit an old mark I’d found some years before when chasing a school of tuna.

It was a shallower shoal of 16m and loaded with large-mouth nannygai.

With the current pumping, it was difficult to get a decent drift happening, so we decided to anchor ahead of the mark.

This paid off and the fish were hungry – hitting our bait before we could flick over the bail arm.

This day felt like extra-hard work as our bodies were aching by this stage.

With a big clean-up ahead and feeling satisfied with my last Torres Strait adventure, we pulled anchor, left the nannygai biting and headed back to Thursday Island.

Another exceptional trip in an amazing part of the world.

Fast forward a few months from that trip and plenty of wind and rain were about in the Bundaberg region, which was fine as my time was spent doing long overdue trailer maintenance and upgrading some of the electronics on the boat.

With a lot of fresh around, I’ve had a little luck chasing mud crabs in the deeper channels and holes in the Kolan and Burnett systems.

As for offshore fishing, well… it’s back to square one again.