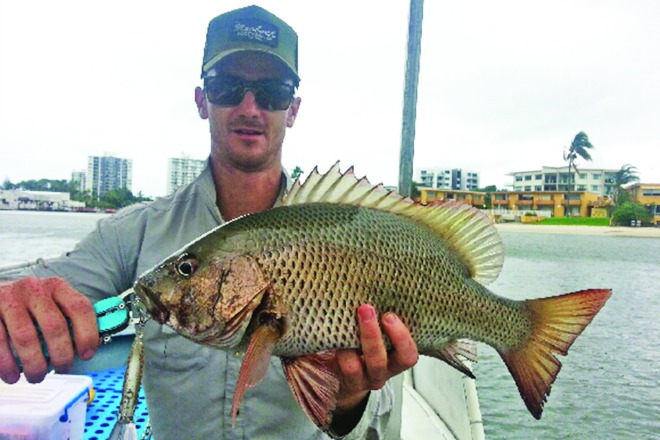 What Fish to Target In April: What’s on the Chew

WITH so many species on the chew, it can be hard to decide what fish to target in April.

April has always been a great month for me because the usually calmer, more balanced weather cycles matched with the slowly cooling water temperatures bring an excellent variety of species on the chew in our local waterways.

During February this year the water surface temperature in the Gold Coast and Tweed rivers registered 30.2C on a number of days, with an average temperature of 28-29C.

These above-normal temperature readings were caused by a serious lack of rainfall and a mini heat wave. This boiling pot of water suited some species such as mangrove jack and whiting but had a slightly negative effect on species including jewfish, bream and flathead.

The good news is we received 210mm of rain in several of the Tweed and Gold Coast catchment areas in early March, which was fantastic because the rivers needed a good flush out and it will have set things in good order for April.

Flathead of all sizes will be prime targets this month, with the middle reaches of the rivers the best place to find them on both lures and baits. Drifting with baits or soft plastics and working the drop-offs of sand and mud banks on the run-out tides should produce some great flathead sport. Due to the good rainfall we received I am hoping we might see an early start to the bream run, which would normally start around June or July.

I say this because we received a massive amount of rainfall in the same months last year and it brought the bream on early. Try fishing the run-in tides around the entrances of the rivers on the days leading up to the new and full moons if chasing big early season bream. Regardless, April will still produce good size resident bream in the structural areas of the lower and middle reaches of rivers.

While fishing around the river entrances this month, particularly the Gold Coast Seaway, keep an eye out for any surface or bird activity which can indicate pelagic action from fish such as tailor, queenfish and trevally.

The deep holes in the rivers will be worth a look for jewies, particularly if an abundance of bait is in the holes and you plan your attack around the tide changes. Live bait, metal blades and soft plastics are the best bets for targeting jew and big flathead that might also be present in the base of the deep holes.

For a change of pace and a tonne of visual fun you could also try fishing the very shallow parts of the rivers with topwater lures such as stickbaits and poppers for some whiting action. Shallow areas where the tide is flowing over yabby banks or broken ground with a mixture of sea grass and sand are top spots to try for whiting on surface. This visual sport is almost addictive when it’s on. For a more traditional approach, whiting will still of course be a target for anglers prepared to obtain quality live baits such as blood and sand worms and yabbies.

April is still a great month for chasing the mighty mangrove jack before their marauding activity slows in the coming winter months. You’ll find the jacks by fishing the most highly structured areas of our rivers around the tide changes, particularly if the tides changes occur in the very early morning, late afternoon and night. Then anchor up and fish with live mullet, legal-length whiting and herring to achieve the best results. Good-quality cut baits of mullet and tuna are very handy as well. It is not such a bad idea to fish a combination of live and cut baits because not only do you hedge your bets but cut baits also release an oily scent into the water, in essence acting as berley that might help to attract and stimulate the fish.


Jacks also respond to a wide variety of lures and techniques. Casting surface poppers tight and parallel to structure works well, as does casting soft plastics and hard-bodied minnows tight to structure. Trolling hard-bodied minnows along the rock walls and broken reef areas of the rivers also entices plenty of jacks and allows you to cover a lot of quality ground.

When fishing for jacks, don’t be surprised to catch a few estuary cod as well because they share the same backyard. Take care and good luck this month.

Smithy has been working as a full-time professional fishing guide for over 20 years, which makes him southeast Queensland’s and northern NSW’s longest-serving guide. Above all the commitments Smithy has in the charter industry, his overriding passion has always been to pass on his specialist experience to anglers and teach people of all ages and angling abilities the correct techniques required to catch all the Gold Coast’s estuary species on a variety of different lures. Smithy’s unique charter operations guarantees you will catch fish on lures or you don’t pay.
Previous Newcastle Fishing Options in the New Year
Next Pro-Cure Super Gel Scent