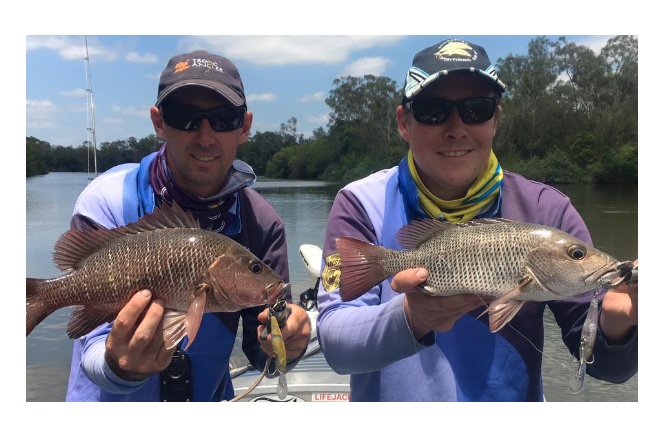 Steve King and Beau Britton with the nice mangrove jacks they caught recently.

Firstly, I trust that everyone had a happy and safe New Years and that you all saw in 2018 in style.

With a bit of luck, the weather in 2018 will be kinder than last year, giving us all more chance to get out and wet a line in the Bundaberg region.

By this weekend, the threat of thunderstorms should have passed, leaving light to moderate south-easterlies forecast for the next few days.

By all reports, the fishing over the past week has been fantastic in both the rivers and offshore.

Good number of school mackerel are right along our coastline in the Bundaberg region at the moment. Trolling Halco Laser Pros, casting chrome metal lures or floating pilchards on ganged hooks are all methods that are working well.

Good sized grunter up to 60cm have also been caught on the many shallow inshore reefs out from Bundaberg.

Baffle Creek has been very popular over the school holidays. Some mangrove jack have fired up in the upper reaches on soft plastics. Down towards the mouth, nice catches of queenfish, flathead, grunter and whiting have been keeping the kids entertained.

The Burnett has been as reliable as ever. Some cracker bream, mangrove jack and big flathead have been caught in the Town Reach with strips of mullet fillet being the best bait.

With the full moon last Tuesday night, the bigger tides fired up some nice summer whiting around the many sand bars in the Burnett.

The Elliott River and Coonarr Beach have seen some nice dart and whiting caught near the mouth and along the beach with beach worms being dynamite on both species.

Further upstream anglers have been hooking in to good numbers of mangrove jack, estuary cod and bream in the deeper holes, with Prawnstars and Zman Swimmerz being the two stand-out lures.

On the fresh water scene, a few barra have been caught at Lake Monduran. Most of the barra have been taken up around “B” Section on suspending hard body lures and 4” to 5” Paddletail soft plastics.

Although the holiday park at the lake received a little damage with the storms earlier in the week, I’m sure it will be back to normal and as good as ever for a camping trip this weekend.