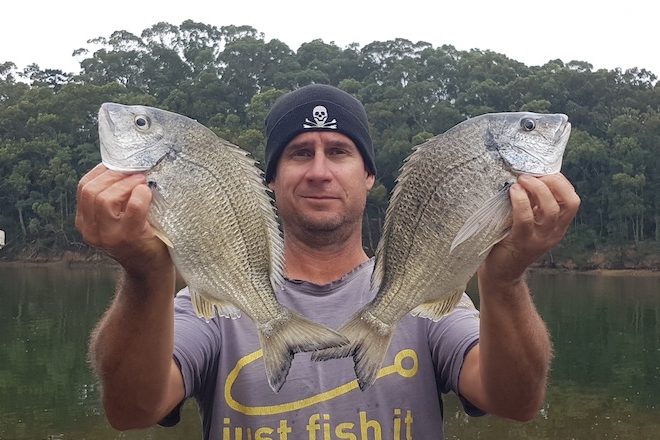 The author with a couple of 40cm Brunswick bream.

RAIN, wind and swell have dominated the past three weeks. Prior to that we had a bit of good weather and several nice fish were caught. My uncle Ron came for a visit and we were able to get out a few times to chase reef fish. The 32-fathom line held a good number of fish and we filled out a nice bag with squire, tuskfish, teraglin and flathead with a few other bits and pieces – pigfish, pearl perch, hussar and such. family fish

There was over 1 knot of current, but the fish were mostly on the bite if you got the drift right. My friend was out wider on the 50s battling with 2 knots of current, so we didn’t bother and grafted away in closer throughout the afternoon. He came home with nice pearlies, but it was a long way back to the mark each time.

The next day was a great forecast, though we woke to rumbling skies and a bit of wind. By late morning a full-on storm rolled through and dumped a fair amount of rain. The storm soon headed out to sea, the wind dropped off and the sun came out – a perfect invitation for an afternoon fish. With time limited, we headed to the 32s again to find zero current with a southerly wind pushing us up the hill.family fish

We caught a few trag and tuskfish but they didn’t bite as well as they had the previous evening – still fun and a good feed though. We had thrown a few dillies over on the way to the 32s and upon inspection on the way back we had a few nice spanner crabs to add to the tally. All in all, it was a great couple of days and good to have Uncle Ron back in the boat with me.family fish

My only regret is that we were so busy fishing, I forgot to get the camera out. When the ugly spell of weather ends, it’s a bit of an unknown as to how the fishing will be on deeper reefs because the dreaded leatherjacket could make an appearance. They don’t stay long but they sure do damage while they are here. Last year they forgot to show up in any numbers, which is a rarity – let’s hope they forget again this year!family fish

The quality of bream fishing over the past 18 months has astounded me. Normally they back off over summer – in size and quantity – but not last summer, and they have just kept powering on through this winter. On the open beaches, bream are being caught though not in huge numbers, which is good for tailor fishos – they can keep a bait on the hook.family fish

Best to fish near a bit of reef or a rock wall, however bream will annihilate any bait designed for tailor. To the point where most fishers just give up and fish for bream. I love bream fishing, if for no other reason than you usually get regular bites, and fooling and subsequently landing a stud bream on light line is a worthy challenge. When I was a younger, fishing magazine writers often referred to the ‘ubiquitous bream’.family fish

It was a bit of a catch phrase in the same era as another over-used word, ‘piscatorial’. Kids won’t know what I’m talking about, but man I got sick of that word! I had to look it up… ‘ubiquitous’, that is. Basically, it means they can be found everywhere, and this is fairly true as I have caught them in freshwater and as far out to sea as Windarra Banks – nine nautical miles northeast of Brunswick Bar.family fish

In close this month, there should be a few reef fish as well as snapper (no take from July 15 to August 15) and jewfish. This will be a good option if leatherjacket come, as it’s either that or keep driving past the jackets to the shelf. Of course, there’s always the chance the jackets won’t even turn up.

A bloke can dream, can’t he?

Previous Warm weather around the corner
Next Busiest Cape season ever