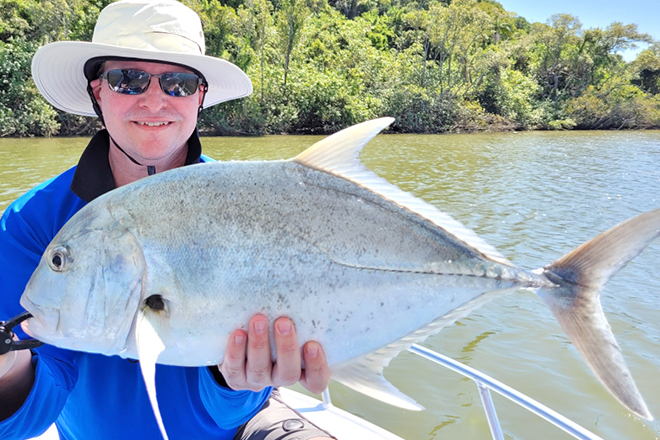 Hi everyone, hope you are all having a good week. After a fairly nice weekend, it was not good news to see another low-pressure system drop hundreds of millimetres of rain on the Gold and Tweed coasts, causing flooding and the rivers to rise and basically putting us back to square one… and just as the water quality was looking better and a good variety of fish were being caught. Unfortunately, it will take a couple of weeks of no rain to get things back to some kind of normal. Let’s check out a few options if you’re keen to try your luck. Gold Coast Coomera fishing

School holidays are here again, and this is a good opportunity to get the kids out of the house to spend quality time outdoors, trying their luck at catching a fish. If you don’t have much experience, that shouldn’t be an issue. I recommend dropping into your local tackle shop – I’m sure they’ll be keen to help you with all the advice needed to choose the right bait and tackle, and to suggest a few fishing spots to get you started having a go at catching a fish with the kids. Keep it as simple as possible, all you need is a basic light estuary combination – a 9lb line, a running sinker rig with a size 3-4 sinker and a size 2-4 bait-holder hook should do the trick on most of the species you may find off a local jetty or beach, such as bream, flathead and whiting. A few good spots to try land based once things settle down after the rain will be either the Tweed River, Currumbin Creek, Tallebudgera Creek, the Nerang River, Marine Stadium, Broadwater Parklands, the main channel near Seaworld, the Grand Hotel jetty, Lands End, Runaway Bay canal entrances, the Paradise Point jetty, the Coomera River and Jacobs Well. After the rain, bream will be around in good numbers and they don’t seem to mind how fresh the water is – they will also be very hungry and will have a crack at almost any bait presented to them. The kids will enjoy pumping yabbies – these are great bait and fun to catch – also try using prawns, worms, white pilchard or mullet fillet to attract a fish. Gold Coast Coomera fishing

After the big flush, mud crabs will be a prime target for most fishos keen to get the pots in and chase a tasty feed. After the water cleared up, the majority of crabs were caught in the creeks and upper reaches of the rivers. This week’s flush will have re-pushed the bulk of mud crabs back into the main channels and deeper holes throughout the Broadwater and Jumpinpin, as they hunt for a feed where the salinity is stronger. I always recommend when possible to not leave your crab pots unattended for too long if you’re crabbing during daylight hours because unfortunately some people can’t help themselves and are tempted to share your hard-earned catch. I recommend to work your pots closer to river mouths and also along deeper channels in search of the crabs that will be on the move over the next week or so, until they make a move back up the creeks and rivers as water condition starts to get back to normal. Some spots worth trying are the mouth of the Coomera and Pimpama rivers, Paradise Point, Brown Island, the Never Fail Islands, Jacobs Well, Tiger Mullet Channel, Canaipa Passage, Russell Island and the Logan River mouth. When it comes to bait, I always say the fresher the better – whole mullet, fish frames or chicken pieces normally work best. A bait bag is a great idea to stop small fish, eels and crabs from destroying your bait. Gold Coast Coomera fishing

Once the swell eases and the water quality is on the mend, heading offshore in search of spanish mackerel will be on the cards. Last weekend, Chris Blair and Kevin Ballantine did just that and slow trolled some well-presented dead bait for a great result, landing a pair of quality spanish for the table. The majority of fish have been taken from the 18 and 20-fathom grounds off the Southport Seaway and also the Gravel Patch off Palm Beach Reef – all producing good catches of solid fish. Keeping an eye on the sounder is very important when searching for spanish. Locating bait schools that will hold fish in the area is key and also handy for collecting live bait to slow troll. If things are looking a bit quiet, I recommend putting on some diving lures that will cover multiple depths of the water column and keeping an eye out for the schools of mackerel that normally show up sitting slightly off the bottom and then extending up higher closer to the surface. Sharks have been an issue for anglers – losing their fair share of fish. Try to get them to the boat as soon as you possibly can to avoid feeding your fish to the tax man. Gold Coast Coomera fishing

Brad from Brad Smith Fishing Charters reports we’ve had a lot of fun on the Tweed River with the water slowly cleaning up after the floods. The cleaner water allowed me to fish upstream in some of my usual haunts that I haven’t been able to fish for the past two weeks. The species caught were bream, flathead, whiting, estuary cod, grunter and a couple of small jewfish. The highlight this week was the occasional school of large giant trevally that were travelling up the river. We found trevally feeding on some big bait schools in deep holes on run-in tides.

Clint from Brad Smith Fishing Charters reports the fish numbers in the Nerang River and Gold Coast Broadwater have been spectacular this week in spite of neap tides and low almanac. We have been catching 50-60 fish a session over the past four days, keeping a few for a feed and releasing most. I have never seen so many bream and tarwhine – at times it is hard to get past them. We kept moving to find flathead, winter whiting, sand whiting, grunter, trevally and flounder. The best lures at the moment are Samaki Vibelicious 70mm – the new Cleopatra Gold colour totally slays – and Ecogear ZX40 in 440 colour. As always smearing on Sax Scent helps get more bites. Live yabbies and Ecogear Marukyu Isome worms in XL and red are catching plenty of fish as well. I went whiting wading on the flats one day too – the biggest whiting was 42cm – and had a heap of fun casting small hard-bodies and catching nice flathead, whiting, bream and trevally. I will be doing more of this on charters in coming months. The best areas have been the mid-section of the Nerang River, the main channel north of the Seaway, and the southeastern side of Sovereign Island – all in 5-7m depth. This coming week, the tides suddenly increase in the lead up to a new moon. This will fire up the southern end of the Broadwater – from the Gold Coast Spit up to Sundale Bridge, and the Nerang River from Chevron Island to Carrara.

Gavin from Sea Probe Fishing Charters suggests trying the fish aggregating devices on the 36 and 50-fathom lines for dolphinfish – there have been heaps of them around – and bottom fishing for snapper, pearl perch, amberjack and yellowtail kingfish. Also in close this week, spanish mackerel are on the 24s and 18s, as will be some teraglin and big silver jewfish.