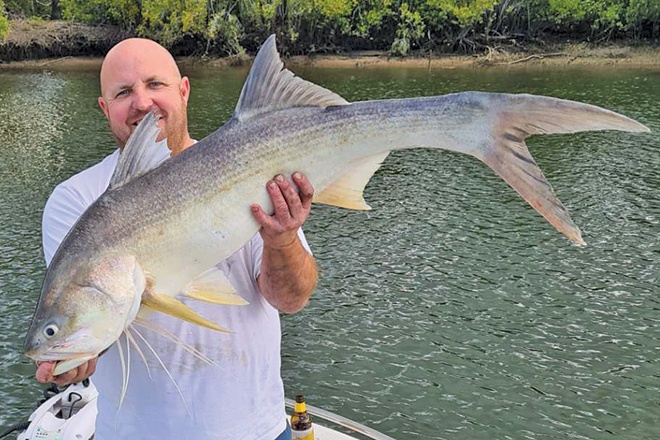 The author caught this nice threadfin salmon while chasing flathead in the Pine River.

Spring is my favourite time of year, with September and October being my favourite months to chase a wide range of species in southeast Queensland. Spring favourite

Winter was a bit of a fizzer for me. Back in the middle of May, I hit an underwater obstruction in the Caboolture River while going to check my crab pots. It was actually a channel marker that had rusted out and fallen over, leaving a very dangerous hazard for boaties. I was lucky I was holding tightly to the tiller arm when we hit, or it could have been a very different story.

I see people driving boats without holding onto the tiller arm occasionally and if I was doing that on this day, I hate to think what could have happened. I’ve travelled this stretch of river hundreds of times, so it was a real eye opener for me. My boat has been out of action for two and half months because of the accident and due to a lack of parts in the country. The post has since been removed and replaced thankfully.

Luckily, I have a few friends with boats who had me out for a fish over the past few months. My friend Benny and I went for a quick flathead fish up the Pine River one afternoon. It was super slow, with only a couple of small fish hitting the deck… until I hooked-up to something solid in the shallows. It swam slowly past the boat early in the fight and I called it for a shark. It hit the afterburners and took off into the deep water, where we slugged it out for the next 10 minutes.

We were both wondering how it was staying on with the 12lb leader, when a big threadfin salmon popped up a few metres from the boat. Luckily it stayed on, and I had a new personal best at 122cm. It’s good to get lucky occasionally.