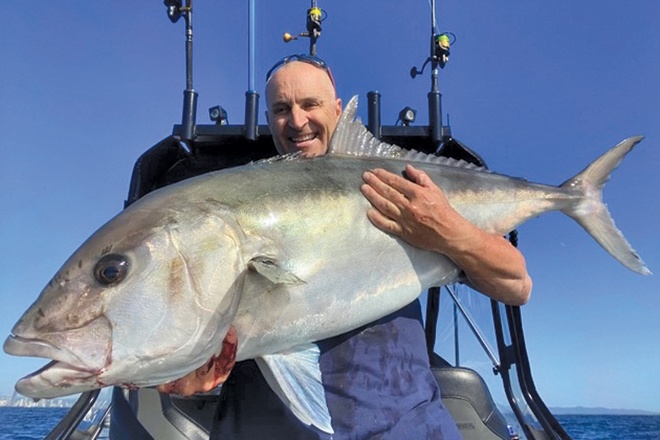 The author with the 1.23m samson fish caught on the live bait grounds out the front of the Sand Bypass Pumping Jetty.

How to get more bites

For many of us being able to fish is something we take for granted. Some of us do it for fun, others do it because it’s essential to catch fish for the family to eat. I live in a house where there’s plenty of hungry mouths to feed and fish have always been part of our diet, ever since I was a child.How to get more bites

Going to a shop and buying fish has started to become a little expensive and for many people, in their household it’s a treat. That’s why it’s very important for us to be able to go to the water’s edge or out on our boat to catch fish for our family. As we are all aware, there have been several lockdowns recently in different areas, and in particular, the ones that have affected southeast Queensland over the past month. But hopefully that has changed now and for the future – if we all do what we are supposed to, fishing will continue to be allowed both recreationally and commercially.How to get more bites

There have been plenty of catches lately and great fish have been taken in close proximity to the Seaway. All of the close reefs have been holding large numbers of bait, and while fishing for bait, I’ve noticed large arches on the sounder – obviously predators rounding up bait in anticipation of a good feed.

Noticing this on a recent trip with a few good friends, we decided to simply hook up one of the live yakkas on a rod we’d had set up for fishing jewfish in the Seaway.
We dropped the line about 6-7m under the boat and placed the rod in a rod holder while we continued to jig for bait. Within a couple of minutes, we noticed the rod was bent over and the new Penn Fathom 8 Star Drag I purchased recently had line peeling off uncontrollably. I reached for the rod and it jammed in the holder for a few seconds, though once I got it out I noted that the drag was done up reasonably tight because we were fishing for jew. The line continued to peel off as though the drag wasn’t even done up, and I knew then that this was a very big fish.