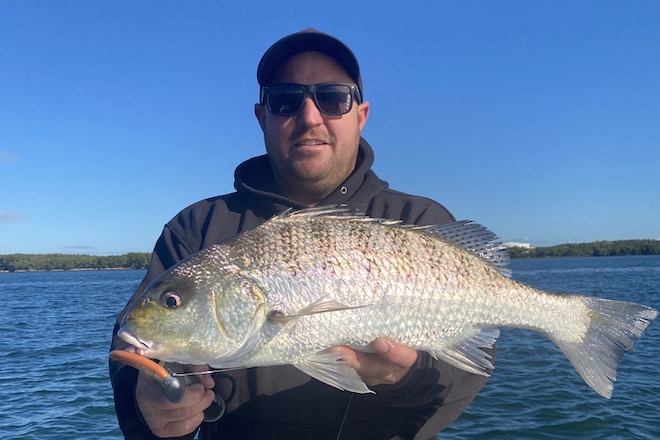 The author pulled this big grunter out of tight cover in the Brisbane River on a Gulp Crazy Legs Jerk Shad.

Grinning about grunter in July

WINTER will be in full swing this month. All cold water species should be in good numbers throughout the rivers and creeks in Southeast Queensland. June started off very well, with constant cold temperatures getting the fish very active. The Brisbane River has still been fishing very well. July grunter

I had a recent session with my mate Bretto on the river. The wind was howling straight up the river early and it was freezing. Snapper were a bit quiet, so we started doing a bit of exploring up around Clara Rock. As we got close the mack tuna were busting up everywhere. They were right up on top of the rocks in a few metres of water and carving up the surface. July grunter

Mack tuna work really well as crab bait, so we had a quick cast at them.  Bretto hooked up pretty quickly on a Zerek Fish Trap. The big fella hadn’t fished for a few months and he was feeling the pain after a few big runs. Eventually a decent tuna popped up next to the boat with the Fish Trap in its side.  Bretto wasn’t real keen on going for round two, so we left them chewing to look for a few fish for the Esky. July grunter

While the snapper were nowhere to be found that day, we did stumble across a school of really nice grunter.  They were holding in tight to very crusty structure, so we had to get our plastics in tight. These things aren’t too different from mangrove jacks, and you need to pull them out of heavy structure once hooked, so the drags were locked up tight.July grunter

We ended up pulling four good fish to 65cm out of the school before they went quiet and moved on.  Hopefully it’s a good sign for the months ahead.  They are amazing on the plate and are great fun to catch, so let’s hope it’s a good season for them.  There are two types of grunter found around Southeast Queensland. The most common is the barred javelin.July grunter

These are the biggest of the two species and they have a minimum size limit of 40cm.  The other is a spotted javelin, which are generally smaller and have a minimum size of 30cm. I have caught a lot of these while bait fishing and cast netting in Pumicestone Passage. They can be a real pest when small and you’re chasing other species. July grunter