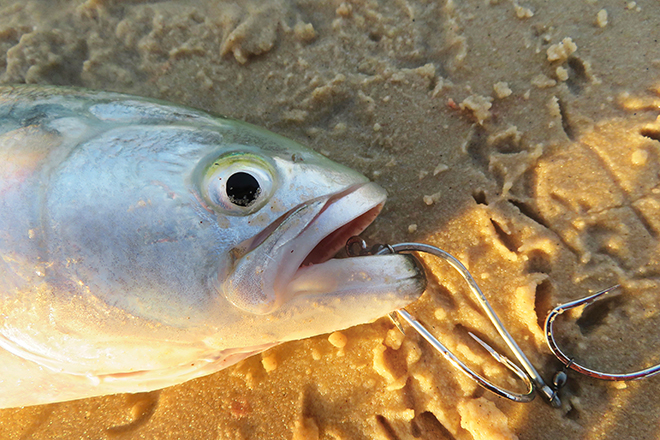 Close up of a tailor on a set of Tru-Turn gang hooks.

Hi folks… so, this month I’ll give a bit of a summary on fishing some of my regular target species over the past month or so, along with a forecast for the month of July and winter.

As I reported in my detailed article last month, winter whiting are a great target species in the colder months and they have really hit their straps through May and in to early June.

Interestingly, I’ve also found them in much shallower water so far this season – perhaps as a result of the water being less clear than is usual for this time of year.

In my last two outings around Amity Banks – outside the green zone, of course – and surrounds, fish have been in water from about 1.2-2.2m consistently, with good quality fish among them too.

Another little tip over and above last month’s is when the tide completely slows around the change and the conditions are glassy, the fish go off the bite.

To fire them up, I use a combination of drifting with a berley bucket, but I also cast well out, let the bait sit for a while and ‘spin’ it in fairly quickly, as though retrieving a lure. forecast for winter

If fish from the school are still around, you can often get double hook-ups because whiting smash bait with red tubing on your two-hook rig as you retrieve it!

Check out the video on my Facebook page for the technique in action.

Apart from winter species, one of my other Moreton Bay favourite targets is trolling for flathead in the shallows.

Unfortunately, this has been much slower since the May rain.

My target areas around bay creeks and mouths – and in fact well up them as the water cools – have been less productive most likely due to dirty water and floating weed fouling the trebles.

Even using ultraviolet highlighted colours in the Zerek Bulldog range.

However, should the rain stay away – or at least ease though the rest of June into July – the fishing should be fantastic as fish head back upstream.

On the other hand, trolling for school mackerel has been a mixed bagged.

Regular bay fisho Spero Kartonos reported some good catches on the troll when the water cleared a bit, but they disappeared after the rain run-off spread further over the eastern bay.

Sean caught the fishing bug bad one very cold Canberra day 20 years ago when he was bored and picked up and read Angler's Almanac by the fireplace. Since then he has filled his mind with knowledge from fishing magazines, books, the internet, TAFE fishing courses, guiding fishing charters (estuaries, beach, bay and mountain lakes) and of course 'on water' experience. He and a group of mates formed a social fishing club and soon started to share what they learnt and caught online. Sean is the admin for Ontour Fishing Australia on Facebook, which is a page that shares information, reports and sponsor giveaways and welcomes all to the site. He plans to move into blogging on his new website when time allows.
Previous Tackling Moreton Bay over winter
Next Shimano Rods