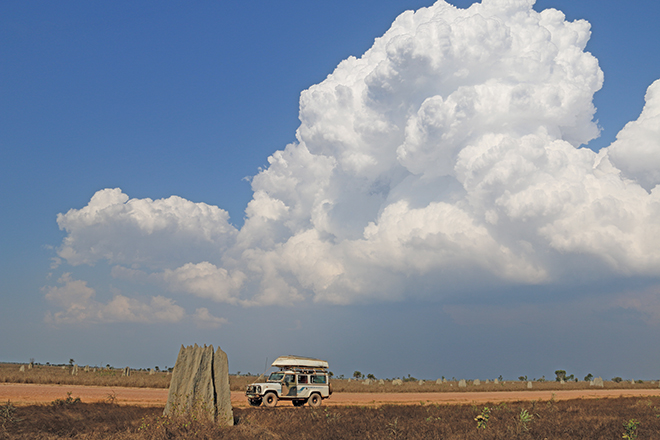 A city of the iconic termite mounds on Nifold Plain, Rinyirru National Park, with a storm building in the background.

While reaching the tip of Cape York or camping and fishing at your favourite Cape destination may be the main reason to travel into this magnificent region, the sights and experiences along the way are absolutely all part of the journey. Cape York termite

And there’s nothing more distinctive up here than the literally thousands of giant earth mounds scattered about – called ant mounds or ant beds – along with endless corrugations. Cape York termite

Of course, they are not unique to Cape York and can be found in savannah country across most parts of Australia’s Top End.

The industrious little animals that build these mounds are actually termites though, not ants.

The mounds are constructed with a mixture of soil, termite saliva and dung, and each one is filled with an abundance of galleries.

These also extend below ground level.

Interestingly, these particular termites are grass and leaf eaters, not timber eaters.

They collect their food at night and store it inside the internal galleries.

The larger mounds – and they may exceed 5m or more in height – can be home to a million plus termites.

Far from being a pest, these industrious little tackers are actually vital in recycling nutrients across the savannah country.

Each mound is in fact a natural self-sustaining compost bin!

There are a few different types of termites in the mound communities.

Worker termites build the mound, queen termites are the breeders and there are big-headed soldier termites that try to repel any invaders, such as ants.

If a mound gets damaged, ants often try to take over and a battle royale develops.

The soldier termites squirt an obnoxious liquid onto the invading ants, while the workers try to seal up the breach.

Though if the ants win, they will take over the mound but can never keep building it – they don’t have the ability.

It will eventually weather away and fall down.

On certain nights during the wet season, the winged or alate termites take off in their thousands from special small launching towers to attempt to start new colonies.

The cathedral mounds are among the largest termite mounds and you can see a few crackers along the road north of Moreton Telegraph Station.

Then there are the distinctive and much narrower magnetic mounds that are aligned on a north south axis.

No one really knows why the termites build them like this and they haven’t been able to tell us, of course.

However, it is generally thought that this special architecture is to help control the temperature inside the mound.

In the middle of the day, the least amount of the mound is exposed to direct sun, which is then at its strongest.

The other type of mound is conical in shape, similar to a witch’s hat.

And it’s these that the endangered golden-shouldered parrot generally prefers to nest in, though not always.

The birds will start to burrow a nesting hole into the side of mound towards late March, when the wet season is finishing up.

If the young birds survive, they will fledge in May or June.

Keep an eye out for these beautiful parrots along the Peninsula Developmental Rd between around the Hann River and Musgrave.

Once widespread across Cape York, it is thought that only around 2000 survive nowadays.

Anyway, that’s a snapshot of the iconic and remarkable features of Australia’s far northern tropics.

Amazing to think that when you drive along most Cape roads you are passing by literally millions of small animals, industriously working away!

Until next month, take care.