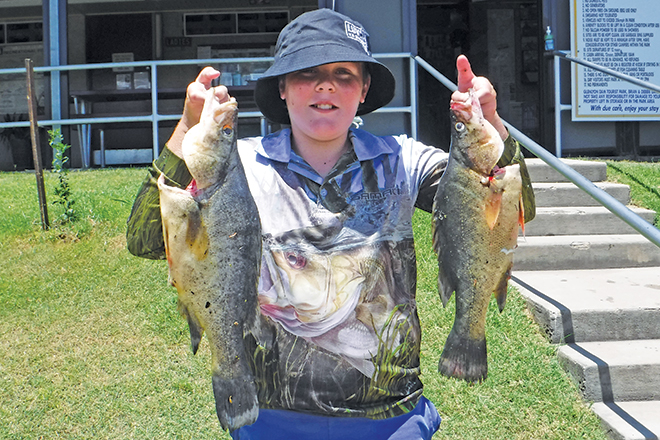 Wyatt Jansch with some nice yellowbelly caught when holidaying with nan and pop.

It’s been a bit of a downer for some anglers, and as I mentioned last month, it’s re-think time. Largest stocking rate

Yellowbelly can be taken 2.5m below the surface with small hard-body lures set around 4m behind the boat trolling or just casting into the tight inlets where water flows down from recent rainfall. Largest stocking rate

The gullies have been the best locations, with the occasional green and Murray cod waiting in the background for an easy feed. Largest stocking rate

The water is still at the edge of the spillway, going over every now and then from rainfall in the district.

Anglers are still finding it hard to fish rivers and streams in the local region as flows of over 350ML travel past, and more is due to the already full rivers, streams and dams on farms.

Some storages are flood mitigation-type systems, though not so for Glenlyon, Pindari, Copeton, Split Rock, Keepit, Chaffey and others.

Those with gates are more or less flood mitigation-type dams.

So, storages such as Glenlyon hold the water for later use on farm or for environmental flows and such.

With this in mind, and our local wet season – as we call January, February, March – now upon us, this will be a testing time for all towns west out to Victoria and South Australia.

There is nowhere that I know of that can or wants to hold water back.

Given this, we could well see the 7000GL actually flow down to the Murray – this is normally required for our Murray Darling River system to survive for 12 months.

So, it’s fish restocking time on our rivers, dams and streams once again, and this time Mother Nature will have had a hand in putting native fish back into our water-depleted systems.

Given the flows that started in late September, golden and silver perch would have done a run upstream for the first time in the past five years.

The water temperature would have been quite good for breeding this season.

I hope most stocking groups think along the lines of putting silver and golden perch – and not cod – back into their stocking locations.

Good reports that catfish are being caught in Glenlyon of 24cm plus, and spangle perch are giving the bait anglers hell as well.

During the inflows into Glenlyon, we were actually very lucky to see these little fish jump up into pipes under roads that let water from the hills back into the dam.

I was fortunate to get some footage of this taking place and see the determination on show.

At last, after some 15 years of local cod studies in the northern region of the Murray Darling River system, Dr Gavin Butler has released the Fisheries Final Report Series No. 161 titles ‘Building a stronger, more resilient and sustainable Murray cod fishery’.

It is a 124-page report released by the Department of Primary Industries NSW in December 2021 – dpi.nsw.gov.au

I would suggest you read it online or get 126 pages into your printer so it can be printed double sided – it’s 252 pages printed single sided.

Previous Land-based in lakes
Next Carp and tilapia eradication