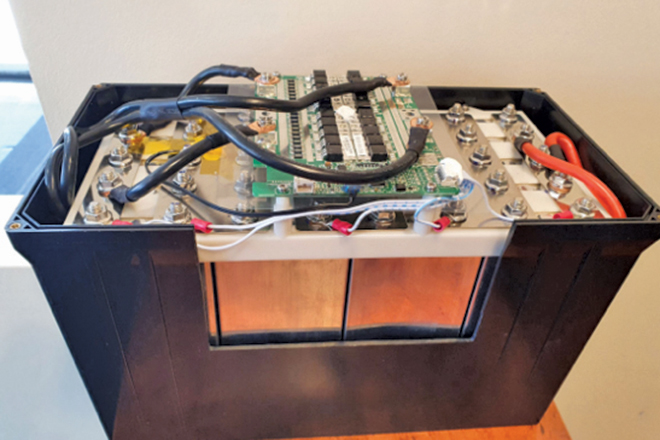 The battery management system inside a lithium battery.

Many of our members have been going to electric troll motors as their anchoring option and while the brand of motor brings debate, probably the biggest discussion revolves around lead acid versus lithium batteries. Rob Schomberg put together this layman’s guide to lithium batteries, which may be helpful. lithium batteries

Lithium batteries have been around for quite a while in various forms and chemistries but for this article, we’ll stick to the LiFePO4 because we use them for boating and not for powering our mobile phones or other electronic devices. LiFePO4 lithium ferrophosphate batteries are called that because – as for lead acid batteries where lead is the cathode – lithium is the cathode in these. LiFePO4 batteries use the same principle as lead acid but are constructed of different materials and produce more usable power for the same rated output, and do so for a lot longer. lithium batteries

Lead acid deep cycle – known as AGM – batteries have a cycle life in the hundreds of charges, whereas lithiums can do thousands – both of these figures have caveats though. Abuse by dropping either to zero volts will destroy a lead acid and compromise a lithium, with the AGM dead or close to, while the lithium will recharge and come back to life but at a decreased functioning capacity. lithium batteries

As a general rule, AGM batteries should not be taken below 50 percent state of charge, and if done will show 12V dropping from 12.8V fully charged. The lithium will be at 13.1-13.3 at 50 percent and will stay at that voltage until 10 percent where it will drop quickly – a battery management system would trip out at this point. So generally, a 105amp/hr AGM lead acid has a useful current of 50 amperes, while the 100amp/hr lithium LiFePO4 has 80/90 amperes – basically twice the power output.

Other points of note are that the lithium is around half the weight of a lead acid of similar capacity – 13kg versus 30kg – and can even be installed upside down if preferred. If looked after, you can get three to five years from an AGM battery while a LiFePO4 can get up to 10-15, possibly even 20 years.

What is a BMS you may ask?

Lithium batteries have a battery management system – electronic thingy – built in to protect it from a few things, including over and under current, short circuit and over temperature. Due to their make-up, lithiums are able to take huge amounts of current to recharge and by the same token discharge huge amounts of current – the BMS keeps this in check.

The types of lithium batteries out there are much more complex than your standard AGM. The first lithium batteries were small cylindrical cells all joined together, similar to a long chain of C cell batteries, and the larger the battery the more cells – 120 or more cells for 12V 100A. The issue with them was with so many solder joints in each battery, if one failed… no battery.

Then pouch cells came along – these resembled ready cooked rice packs with two leads coming out of them.

Now prismatic cells are the norm, around the size of your standard paperback novel, with an aluminium case – four per 12V battery – and are connected with solid copper bars and bolts, making them a lot stronger.

There are also larger cylindrical cells – lithium titanate – around and you might get eight in a 100A battery instead of 100+ for the smaller cells, but I’m not sure how good these are.

If you’re keen to buy, then try not to get ripped off. Lithium batteries are no different to anything else and are probably easier to get duped with as they all look the same, but what lies inside the case could be dodgy to say the least. All LiFePO4 cells are made in China by probably four main factories, so the battery you pay $2000 for might have the same cells as the battery available for $800.

How do you know?

Ask questions, do research and try to sort through the smoke and mirrors. While most batteries are now using prismatic cells, they are the same cells used in the current wave of hybrid and DC vehicles. This now brings so called B-grade cells into the equation, which are used cells out of these vehicles. They test OK but may be downgraded due to usage – that is, a 150A or 120A cell may be rebadged as 100 ampere hours and resold.
These are mainly sold individually online but some of the LiFePO4 batteries on one site being sold for $400 may have these or smaller cylindrical cells.

Charging is another issue as LiFePO4 batteries will charge off any charger or alternator but will never get to full capacity, and this will effect life span. They require a higher charge voltage of 14.6V with no float charging and will hold full charge for three or more times longer than an AGM battery. Best consult a battery specialist for your needs and requirements.

Most applications for our club members are for electric troll motors. The weight savings can be impressive, especially for a 24 or 36-volt system and, when combined with increased output, the option needs looking at. Onboard charging for the electric batteries from 240V shore power is fine but debatable if there is any advantage charging from your outboard – given the number of other devices running off it, the alternator output, current drop due to wiring and how far you’re driving the boat.

Installing LiFePO4s for house batteries have plenty of advantages if you need the power and they are becoming a must for caravan owners running big inverters or staying off the grid for long periods. If you are looking at LiFePO4 batteries, then do your research and don’t buy the cheapest. If you have the coin, buy the top of the line expensive brands from $1000-2000 for peace of mind, but most of the mid-range units from $700-800 are OK too.

Check what cells – prismatic preferably – and BMS are used, and online research of brand feedback may also be worthwhile. For charging systems, the same applies – pay $500 for a big-name brand or look for the same specifications on a much cheaper unit. Once again mid-range seems the best value, remembering nearly everything for lithium batteries comes from China. Do your research, ask questions and don’t cut corners and you’ll get a reliable economic outcome.

Please note that the Power Boat Anglers meetings occur on the first Wednesday of every month at ‘The Club Manly’ (bowls club), 26 Faine St Manly from 6.30pm for a 7.00pm start.

The last meeting will be Wednesday December 1, 2021 and with no January meeting, PBA will reconvene on Wednesday February 2, 2022.
Until next month, safe boating and an enjoyable Christmas and New Year to all.