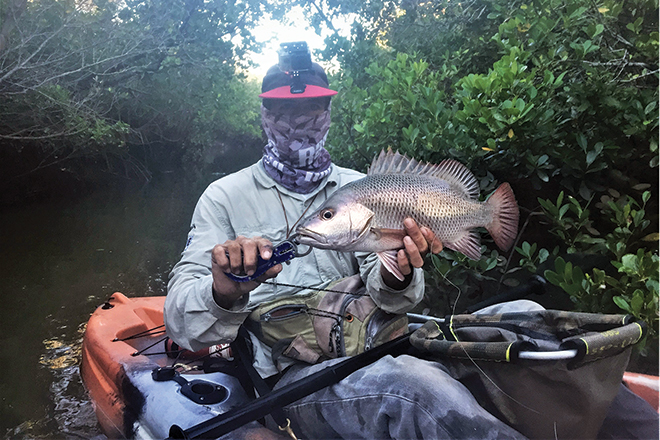 Luke Thauer hooked a jack while venturing up a skinny creek.

OVER the past couple of months, and with the storm season well and truly upon us, I’ve really started to focus on lure fishing for mangrove jack.

Lure fishing for mangrove jack can be frustrating at the best of times but the reward of catching one is unlike anything else. I started off the jack season by heading to Bundaberg with my good mate from the Brisbane River Boys, Luke Thauer. I was only able to get away for two nights, so we decided to camp on the creek bank to maximise fishing time.

On the first day, we set off in our 2.8m Pro Fisher Dragon Kayaks on the hunt for the elusive mangrove jack. We explored beautiful creeks and caught plenty of cod, but on the first day the mangrove jack evaded us. We had dinner and went to bed at a sensible hour so we could wake up extra early to head to one of Luke’s favourite creeks.

Within an hour of waking up the next morning, I had my first jack of the trip and it was a beauty. Luke also caught one that morning and I picked up another small jack in the afternoon.The creeks we were fishing were so picturesque and the only way to access them is by kayak.

The Dragon Kayak 2.8m Pro Fisher is such an ideal yak for manoeuvring up skinny creeks and its stability is outstanding. After being out on the kayaks all day, for me to get out of the kayak at the end of the day without a sore back is testament to its quality. I had such a ball fishing with one of the best jack fishers I know and I can’t wait to get back up there to make many more memories.

After that successful Bundaberg trip, we set our sights on Baffle Creek, which is one of my favourite spots to camp, let alone fish. The landscape was extremely dry because it hadn’t rained for over three months.The lack of rain also meant the salt content in the water was extremely high. This pushed all the fish well upstream and made it difficult for us to locate large numbers.

Baffle Creek features numerous rock bars and snags, so you must be extremely careful when navigating. We mainly used soft plastics because we wanted to fish the deep rock bars and snags we located on our sounder. MadZ Mini Skews, Z-Man 3” MinnowZ and Z-Man 4” DieZel MinnowZ were the plastics of choice. We found gold colours worked best, especially in the early morning.

We ended up with a few nice mangrove jack, queenfish, tarpon and cod, however they weren’t the beasts we’d been hoping for. Each season I find myself venturing away from home, so this season, my brother and I decided to start hitting our local rivers and creeks to try to crack a pattern. We started on our doorstep: the North Pine River.

This river is not known for its jack fishing, with some people even saying no jacks are in the system, but we set out with high hopes. One hot and muggy afternoon we started lure fishing the deep rock walls. Each rock wall yielded about half a dozen cod and we were pleased to see so many cod around. This gave us more confidence because if the cod numbers were up, we were hoping the mangrove jack numbers would be too.


By about 5pm we had reached one of our favourite rocks walls. We cast into the bank and Hayden got absolutely smashed. He was using 30lb braid and leader with a locked drag but this fish grabbed his plastic, pulled drag with ease and busted him off within seconds. Hayden and I looked at each other and were so happy, yet so gutted at the same time.

We had finally hooked our first quality jack, but for it to be over that quickly was heartbreaking. We headed home for the night and decided to go back in the morning. The next morning was very warm and we went straight back to the rock wall where Hayden was busted off the previous afternoon.
To our amazement, Hayden hooked up again and this time he managed to pull the fish out of its home and guide it into the net.

It was a Pine River jack! After a few yahoos and high fives, we put it on the brag mat, took a quick photo and let it go. We fished the morning out, with only cod coming over the side, but we couldn’t care less because all our hard work had paid off. Hopefully we can catch several more jacks while lure fishing this season.
Jack fishing is so thrilling and once you’ve got the bug, you can never shake it.

I have John Costello to thank for that because his DVDs were what really got me hooked. I have been lucky enough to fish with John a few times and the knowledge he has shared with me has entirely changed the way I approach jack fishing. The respect he has for not only the fish but the fishery itself is amazing, and the way he interacts with the rest of the fishing community is great.

He is always willing to help and I would urge anyone who is getting into jack fishing this season to buy his DVDs and head along to some of the talks he does at tackle shops. I hope this article gives you the urge to try lure fishing for these red devils because they truly are thrilling fish to catch.
If you have any questions about our gear or for more tips and techniques, don’t hesitate to message me through the Pine Boys Facebook or Instagram pages.

Mitch is an avid fisherman based in Brisbane's north. He runs the 'Pine Boys' Facebook page and has had experience fishing all over Queensland, from the tip of Cape York right the way down the coast to Brunswick Heads.
Previous Bassday Bungy Cast new colours
Next Shimano Sustain FI spin reel