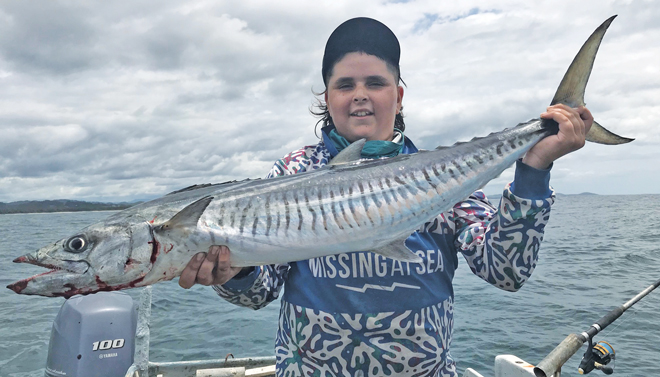 Well, I guess the news from the past month is the nagging swell. Menace marlin mackerel

It’s been relentless but the bars have been workable on the tides, and the good news is there are fish out there. Menace marlin mackerel

Small black marlin have been reasonably prevalent this summer and have given anglers a thrill with their antics. Menace marlin mackerel

We have had massive schools of pilchard travelling up the coast and I think this is what the marlin must be eating because slimy mackerel and even yellowtail scad have been hard to find.

Most of the marlin being caught so far have fallen for bait intended for mackerel, but those going a little wider and actually targeting the bait balls for billfish have been having some fairly big days.

A sailfish was even caught out at the fish aggregating device recently, which isn’t a common occurrence around here.

If you are wanting to catch a juvenile black marlin, there might still be a few around this month.

The hardest part about catching a small marlin is being in the same place at the same time as the fish.

They move around a lot chasing baitfish but, if there is one in the vicinity, it isn’t hard to hook them with a live bait.

Don’t be too worried about presentation or leader size or anything like that.

The bigger fish might be a bit smarter, though due to their metabolism, the juveniles have to eat pretty much whatever fits in their mouths.

Many a time I’ve been trolling a dead bonito or tailor for a mackerel and the rod tip buckles then straightens, and I curse because I think I’ve just missed a mackerel bite, only to have the rod bend then straighten again.

Sometimes there’ll be half a dozen bites or more, and you soon twig it’s not a mackerel but something without teeth – the usual culprit is a small marlin.

Occasionally, a cobia or a mahi mahi will have a couple of bites at a slow-trolled dead bait, but if you keep getting bites and missing them, it’s a marlin.

If you want to catch marlin, keep trolling and even increase the speed.

Generally, marlin don’t give up and will keep hitting the bait until the hooks eventually find their mark.

In the end, the marlin must be chasing a bonito head and some bits of skin, but they’re persistent, I’ll give them that.

The other alternative – if you’re like me and don’t want to hook marlin – is to throw the boat in reverse for a few seconds and let the bait sink.

Sometimes a marlin will swoop around and pick it up, but mostly they seem to lose interest in a sinking bait.

At least this way you get your rig back and can put a new bait on to keep fishing mackerel.

If you’re wanting to catch a marlin, live bait is your best bet because they swallow a yellowtail or slimy pretty quickly and you’ll get a solid hook-up.

Some mackerel have shown up here off the Byron coast.

It hasn’t been insane fishing but the numbers were reasonable of both spotted and spanish mackerel.