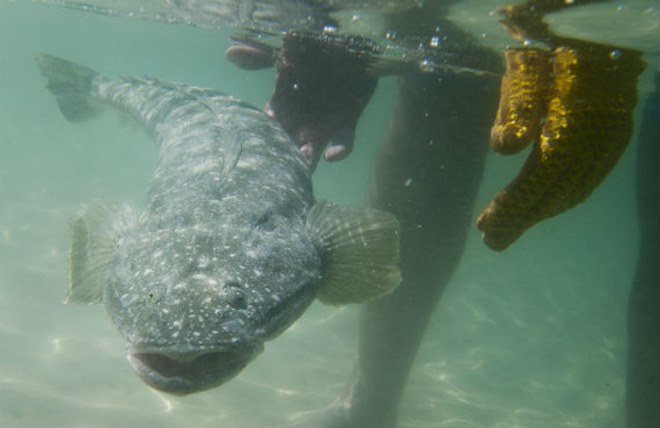 The first metre-long dusky flathead – the Holy Grail for all keen flattie fishos – has been tagged as part of the Trophy Fishery Program!

This program is a grassroots citizen science initiative involving anglers working with DPI to find out more about large female flathead in the Lake Macquarie, St Georges Basin and Tuross Recreational Fishing Havens.
Col Couchman, a keen angler and member of Basin tagging team, landed the trophy-sized flathead on the weekend. It measured 100cm on the dot and was tagged before being released.
Interestingly, Col caught the mighty fish on one of his DIY soft plastic lures, a prawn pattern rigged on a home-made jighead. Well done, Col, on a truly special capture!
Prior to Col’s “metery”, the biggest fish tagged under the Trophy Fishery Program was a 97.5cm fish caught by well-known flathead specialist Dave Johnston in the Basin in February 2017. More recently, Lake Macquarie stalwart Mark Williams tagged a solid 95.5cm fish with a cracker 97cm model tagged by Jim Mannix taking honours as the biggest so far out of Tuross.
Click here for tips on catching big flathead!
To date, a total of 745 trophy flathead measuring 70cm and above have been tagged and released in the three RFHs as part of the Trophy Fishery Program. A total of 87 fish have been reported as being recaptured. The information from the recaptures contributes valuable data on flathead movements, growth rates and post-release survival.
The Trophy Fishery program is a great example of grassroots anglers and DPI working together to improve key recreational fisheries.
Go to https://bit.ly/34wCm6T to find out more about the Trophy Fishery program, including best practice tips for handling and releasing big flathead.
If you catch a tagged flathead in the Basin, Lake Macquarie or Tuross, make sure to head to https://bit.ly/3otHUXC to report it. The info gleaned from these recaptures is vital!