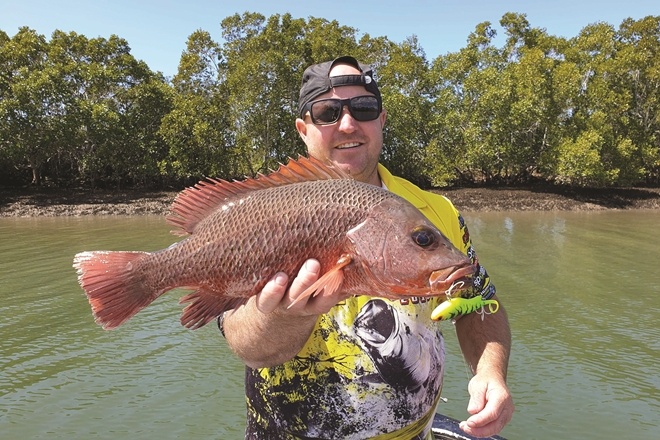 The author and a nice mangrove jack taken on a Zerek Fish Trap.

November generally means very hot days for South East Queensland. And the hot weather translates to the water temperature rising in rivers and creeks, so mangrove jack will be in full swing. SCF competition

Jack are a very popular target at this time of year. Their aggressive nature, speed and bad attitude can see anglers getting very addicted to chasing the ‘red dogs’ during warmer months. The rivers and creeks were very clean at the time of writing.

This can make getting a bite from a jack much more difficult. Scaling down the gear you’re using is one way to hook more fish, but it can also see you getting busted off a lot more. Targeting jack at night is another way to get them to bite while the water is clean.SCF competition

Jack move around quite a bit at night and leave their crusty homes to feed on baitfish. Fishing around lights that are shining into the water can work really well. The lights attract the bait and the bait attracts the fish. Jack won’t be far away, especially if there is good structure such as bridge pylons or rocks. I have heard the Bureau of Meteorology mention that we are in for a wet spring, so hopefully the rain turns up this month and we’ll have excellent jack action.

This year my mate Phil and I fished the SCF competition based on the Sunshine Coast. There are plenty of categories to try and win in this comp, and we decided to chase a range of species instead of trying to take out the biggest. We had a good game plan leading up to the event, but the weather was terrible.

Fishing started at midnight on the Friday night and our strategy was to try the Bribie Island Bridge for a few species, but with wind gusts of over 30 knots blowing straight up the Pumicestone Passage, it was nearly unfishable.SCF competition

The next morning, we pulled the pin on the passage and moved to the Caboolture River, which was the southern boundary for the competition. It proved to be a good move because during the morning we nailed a couple of jack, flathead, bream, more flatties and a small jewfish.

After dark, we decided to chase shark. There was a real-time online scoreboard to check and see what catch was needed to be top of each category. Only one shark had been caught at that point, so we floated out a couple of pieces of freshwater eel.SCF competition

We missed a heap of small sharks that night due to heavy gear we were using. I’ve caught a lot of sharks in the Caboolture River over the years, with a few solid bullies among them and I didn’t want to fish too light. We gave up after a couple of hours and had a sleep.

The next morning was nice and calm, so we had another go at shark and caught two small models in the 90cm range straightaway. The rest of the morning was spent chasing threadfin salmon and another small jewie.SCF competition

As both were unsuccessful, we pulled the pin and went to the presentation held up the coast at Nightcap at Waterfront Hotel. The presentation was entertaining, with plenty of drinks and laughs flowing. I ended up taking out the shark section and Phil missed out on the bream section by one centimetre.

If you want to see the results, jump on their website and have a look. We had plenty of fun and I’m sure we’ll be back next year to have another go.