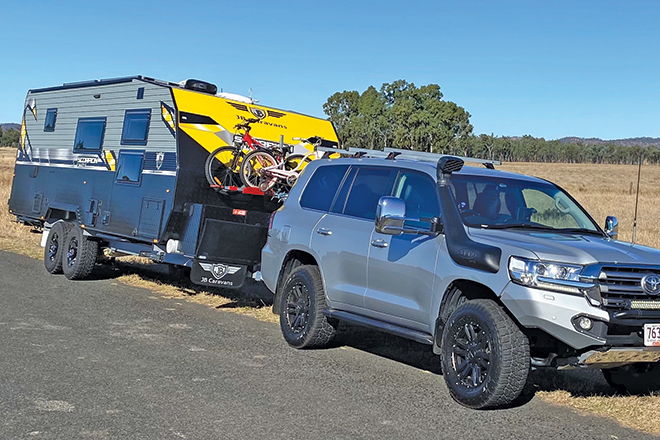 The new JB Scorpion Sting – with the pricing of second-hand vans, new was a better way for us to go.

My family loves caravanning and camping holidays, and earlier this year the decision was made to do a four-week adventure around Queensland, starting the week before the June July holidays and finishing a week after. Our partners in crime, or touring buddies, were family friends the Bocks – Nick, Kylie and kids Mason and Mikayla – with whom we have shared several short escapes and smoked meals. Mini Queensland lap

Our first obstacle to overcome and turn the plan into reality was getting a van. Late last year we sold our beloved Kedron caravan, as the family had outgrown it. The Kedron served us extremely well over the past five years, with plenty of good times had on and off road. Unfortunately, the Kedron model with the layout we were after was heavier – so, given the LandCruiser had a towing capacity of 3500kg meant the van would only have a small payload. So, the hunt was on for a new or second-hand van – though it was going to be tough coming from one of the pinnacle Australian-made caravans. Mini Queensland lap

Our efforts to find a van were made even harder due to the lack of availability of vans and because everyone seemed to have the same idea. Long story short… we looked at a lot of new and second-hand caravans before deciding on new a JB Scorpion Sting. The pricing of second-hand vans meant new was a better way for us to go. As it turned out, we were a little lucky that a ‘yard stock’ van in the style and layout we wanted was already on the schedule and due for completion a week before we planned to head off. Thank you to the team at JB Burpengary for their help in getting the van ready for us in time for the trip. Mini Queensland lap

Since the caravan arrived a few days before we planned to leave, our clockwise lap of Queensland was going to be its maiden voyage and a decent test run. We have talked about touring for longer, even taking a year to do the full lap, so this trip was also a test run to see if we could survive an extended road trip as a family. After a few more ‘planning sessions’ – read as consuming smoked meals and beverages – we had put together an itinerary and route for the four-week sortie… that is to say, our wives had.
I thank them wholeheartedly for the huge effort they put into this – since we were on a tight schedule and, travelling over the school holidays, several if not all of the major camping spots and tours needed to be booked in advance.

This might seem simple, but I can attest to the fact that it isn’t, and their pre-planning prior to us heading off made the whole adventure a lot smoother and streamlined. Thankfully our departure date was before a Brisbane lockdown, which meant we were able to travel. We hit the road mid-morning after peak hour traffic for our first destination – Miles.

Though Miles is only about four hours from Brisbane, we had decided not to do a massive first day and instead split the trip to Carnarvon Gorge – our first major destination and where we planned to stay for a few nights. We also wanted to see how the van travelled fully loaded and how the kids handled being in the car for a long stretch. After a successful first day – and only one wrong turn that took us 60km further – camp was set up at the Miles Showground.

While both vans were capable of free camping and there were several nights of that planned on the trip, for ease we chose the showgrounds, plus the Bocks had hired a van so they were testing it out before the free camps. A family of four was around $30 a night, for which you got power and water plus use of the showers and toilets.

After a cool start to the morning, we were on the road again with another easy drive to Roma and then north to Carnarvon Gorge. Most of the Queensland outback towns have something worth seeing, so I recommend stopping and checking out the local information centre. Roma for instance has streets full of bottle trees and a designated park for the largest bottle tree, which made for a good pitstop. It was also interesting to see the old post office – especially as we mail a lot of magazines out each month. Most of the post offices we saw looked very similar, having that traditional outback homestead style.

Our final pitstop before setting up the caravan in Carnarvon Gorge was Injune, which again had a great information centre. Here we bought a few maps and some free brochures to help the kids with their daily journal entries, which covered our home-schooling duties for the trip.

The journey will continue, as we explore Carnarvon Gorge for a few days and then make our way north to Emerald and west to Longreach.