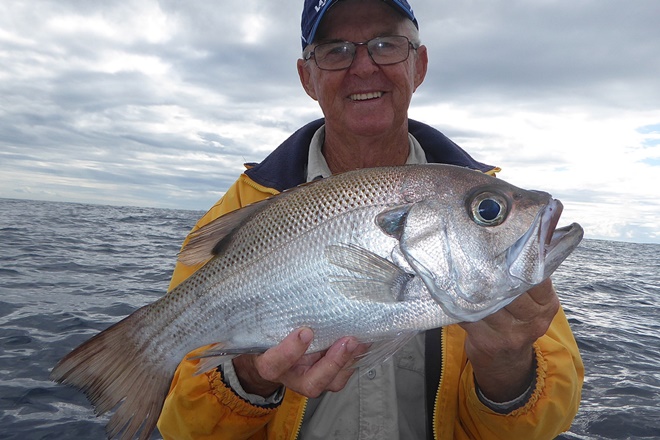 Hi Everyone, hope you have all had a good week, great news as restrictions begin to ease Coomera Houseboat Holidays are good to go and everyone can start to enjoy a relaxing holiday on the Gold Coast waterways once again. Looks like a bit of a mixed bag off weather at the moment on the Tweed and Gold Coast with wind and rain hanging around and the odd weather window for keen anglers. Let’s see what’s been happening this week.

Local angler Wayne Young reported last Sunday he did well fishing the 24 fathom grounds east of the Seaway scoring a nice Pearl Perch and a mixed bag of reef fish float lining WA Plichards and Bonito fillets. With good reports the past few weeks it is great news as we head into Winter. Late last week Wayne also headed up the Nerang River with his mate Pete in search of some Whiting, the boys did well landing a great feed of quality Gold Coast Whiting using Blood Worms for bait.

Fisho’s did well in the Gold Coast Seaway this week managing to find some top-quality Jew Fish using live baits to temp a bite. Timing is key you have to make sure you are fishing the last hour of the run in and the first hour of the run out to maximise your chances. Best live baits are Mullet, Yakkas, Herring and Pike, use a twin hook Snell rig and a 40 to 60lb mono trace.

Brad from Brad Smith Fishing Charters reports the Tweed is much the same as last weeks in that the fish are still holding in the mid to upper reaches of the river.  The weather has been fantastic with light to no wind at all and warm winter sunshine making the conditions very comfortable. The lack of wind has made the conditions perfect for drifting and jigging both soft and metal vibes in the deep holes. The deep holes are still producing some Flathead and nice sized Bream as well as the odd good Whiting and small Jew. Trolling the flats between the deep holes has also been consistently producing a mixture of Flathead, Bream and Whiting with the slam lures working well. I have been experimenting with slam lures for the past three weeks and i have to say I am very impressed with them for both their tight action and the fact that they will dive down to about 4.5 metres when trolled with the tide with light braid and leaders. Lets hope the action continues until we talk again next week.

Clint reports in the Broadwater he had Sammy Hitzke’s Dad Terry and his mate Norm were on board. We started off by drifting around the Southport area with vibes catching Flounder and Winter Whiting. We then pulled up on a big bank at Wavebreak Island to pump some yabbies, leaving the boat in knee deep water on the run out tide. Time went by and we got a bit distracted while having a land based fish and before we knew it the boat was high and dry, and not going anywhere for the next five years. First time it’s ever happened to me. Anyway we had no choice but to fish on, and for the next few hours we caught a bucket full of big tiger squid, some solid Luderick, and flathead, bream, whiting. All in a small, sandy, shallow channel. Amazing what you find sometimes when you stop and look at things closely. Once we were loating again we caught a number of nice size Arrow Squid and Flounder. There is still a lot of bait fish in the Broadwater, and Sand Crabs around Ephraim Island. The Nerang River has produced  a few legal Flathead on hardbody Slam lures, plus some Tarwhine and Bream.

Gavin from Sea Probe Fishing Charters reports starting out wide on the shelf around Jim’s and riv ground still few Blue Marlin getting caught on lures between 8 and 15 inch lures. Closer on the 50 fathom areas still a few Kings, AJ’s and a mixed bag of reef fish including Snapper and Pearlies, you do have to work hard for them at the moment due to the water being warm still. On the 36s dolphin fish around the fads also on 24s have seemed a few bigger Snapper staring to show up using really light sinkers with whole pillies, squid and live bait early morning being the best for snaring a bag of reef fish.