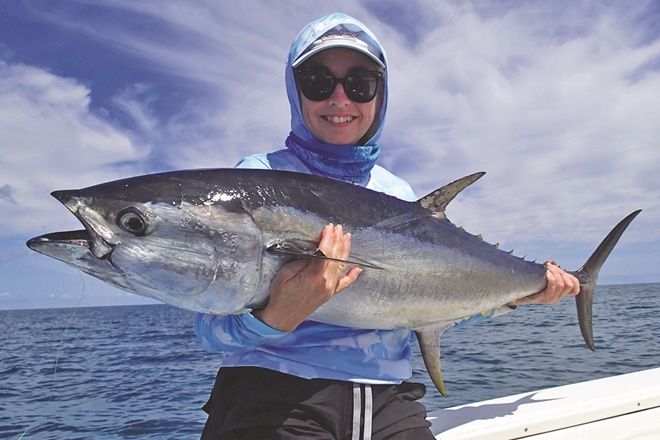 WELL we’ve gone from heat and humidity to serious southeasterly wind and showers blasting the Fraser Coast and Hervey Bay, something we really do not need.

But rain is a regular occurrence in autumn here, so I’ll just have to suck it up and wait until the wild wind and poor weather pass. On the plus side, tuna numbers have been increasing but are nowhere near what we experienced last year.

At this time of year in wild wind at Hervey Bay, we usually get smaller longtails and mack tuna. It is the numbers game we love in autumn. As always, small chrome lures and Z-Man plastics retrieved fast have been the go, but bait is bigger and the fish are less fussy, taking topwater lures more readily. wild wind

Topwater lures that skip, such as the Cotton Cordell Pencil Popper, and sinking minnows similar to the Palms GIG and Maria Rerise, will do the trick. Big tuna are still about, but like anything, the higher the weight class, the smaller the number available. So if you do see them, please use heavy tackle and get them in as fast as you can.

Use at least PE3 line with 40lb leader and a stout, powerful and comfortable rod. And if you’re a beginner, I suggest a show of restraint by not targeting these fish. Earn a few stripes on sub-10kg fish first and get comfortable with back-breaking battles.  wild wind

Losing a big animal to a shark or prolonged battle will only hurt your chances of catching decent numbers in future. You can see tuna have what it takes to reach massive sizes, and obviously they have the resilience to thrive. We need these big fish to reproduce as often as possible to ensure the future of the fishery.

As always, other pelagics can often be found roaming near the tuna bust-ups. Of late it’s been medium-sized queenfish, yet larger specimens are mixed in, just making the magic metre mark. Though not always busting up like tuna, queenfish fins will scythe through the water’s surface. In the right light, you can see the sun reflecting off their mirror-like sides.

More often I’ve seen them marking on the side-scan sounder. They can be taken on metal lures spun fast across the surface as well as small topwater lures. However, the good old Z-Man StreakZ will account for most sub-surface hook-ups. wild wind

School mackerel are proving Esky-fillers for anglers spinning metal lures. A few larger spanish and broad-barred mackerel may join the mix too. If they get a little fussy, try a few rips and jigs in the retrieve.

However, this may result in lost lures because as you pause, the fluttering lures are more likely to get snipped off as fish come charging in. Mackerel are swiping attack predators and will often maim prey with razor-like teeth, hence at times you won’t feel you’ve been snipped. Looking at how my leader gets shredded, I hypothesise it’s sometimes a gang of mauling fish, so the fish that gets your lure will not be the one that snips the leader.

Many fish will school with mackerel, so expect the odd by-catch of tuna to stretch the battle time out for added fun. Scraps will fall to the bottom during razor-gang attacks, so you never know what will eat a metal lure after it hits the bottom. Reef fish will often scoff a cheap metal lure. You can find plenty of reef fish among the bait getting pushed to the bottom, such as coral trout, grunter and nannygai.

It can be difficult to separate targets on your sonar because they hang tight to structure and a large quantity of bait can obscure their presence. When I target reef fish without the presence of other predators, I often look for clusters and clouds on the sonar and side scans, which may suggest bait or life. And among that mix is where I often find the species I’m after. wild wind

Visit Tri's Fraser Guided Fishing Facebook page @ https://www.facebook.com/FraserGuidedFishingWithCaptainSquinty?fref=ts or give him a call on 0427 230 261 to book a charter.
Previous Catch, upload and earn with PicTrax
Next Mixed bags of reef fish on Gold Coast