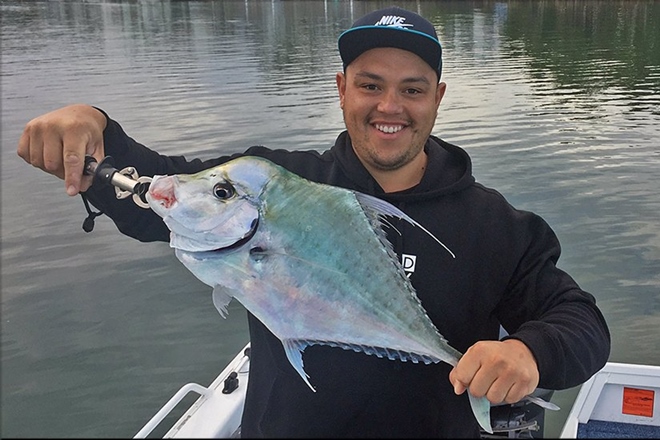 Noosa really turns on the fishing

With the cooler weather we’ve been having, trevally have really been on the chew, with some great catches reported this week. Goldens, GTs and big eyes have all been bagged. In an example of how well this area turns on the fishing, some stonking great queenies were also landed in the hole at the end of the sand bags with the biggest just missing the meter mark. Tailor are still being caught in the frying pan with plenty of choppers to keep anglers entertained. There have been some reports of fish up to 70cm in the deeper sections around Woods Bays and the Noosa sound. Surface lures are still the go to method for targeting these speedsters, Fish candy baby bells, Strada virals and nomad mad scads have all been very popular.

There are still plenty of flathead being taken. Some great sized fish have been bagged up river this week with the Tewantin stretch on the run out tide being the most productive. Hard body lures like the hot pink Zerek Tango Shads are working really well, these are a great little lure and very successful when worked along a drop off. Soft plastics like Zman Grubz in 2.5in, Chase baits in 2.5 and 3 inch and Squidgy Bloodworm Wrigglers have all recorded good catches. A slow retrieve with a double hop technique is working well. The whiting are still on the chew taking live yabbies and live worms.  The top of the tide and the first hours of the run out have been fishing well, with the river mouth, Weyba creek and opposite the Yacht Club popular spots. Fresh mullet strips, fowl gut, mullet gut and frogmouth pilchards were the baits of choice for the bream brigade this week. The run out tide in the lower half of the river is still producing the goods.

On the offshore seen; the weather has finally come good and the offshore anglers have taken advantage. Heaps of Spanish mackerel have been taken on all the close in reefs. Long tail tuna are still in great numbers with the size of the fish increasing every week. For those fishing the bottom   Sunshine Reef has produced tusk fish, grass sweetlip, mori cod, coral trout and pearl perch with bait and lures fished hard to the bottom getting the best results.  North Reef has had snapper, grass sweet lip, pearl perch, Spanish mackerel and cobia all on offer. The floater rig always seems to work well at North Reef with either a pilchard or slimy slowly making its way to the bottom. The Reefs off Double Island has seen pearl perch, scarlet sea perch, Spanish mackerel, grass sweet lip, red emperor, cobia and the ever present hussar. Hussar make great baits for the reef so if you are picking up a few take the fillets off and run them down a large set of ganged hooks.

On the beaches; after the South easterly winds that have been lashing the coast last week some really great gutters have appeared in close on the beaches. Some great Bream, whiting and flathead have all taken up residences and are in good numbers. The area North of Teewah beach has fished well for whiting and flathead with some nice sized tailor and jew in the mix. Tailor have been caught off the rocks at the Fairy Pools in the Noosa National Park on floating pilchards. Some good whiting, flathead and tailor were also taken at the river mouth.

Borumba Dam has been fishing well this week after the rain. Bass have been taken in good numbers. The timber at the junction of the Yabba and Kingham arms fished well. Saratoga have been a little quiet this week a few have been caught in the very late afternoon in the Yabba arm. Lake Macdonald was a little quiet this week with only a few anglers getting on the water. A few nice Bass have been taken along the bubble line and up around the botanic gardens in the early morning.