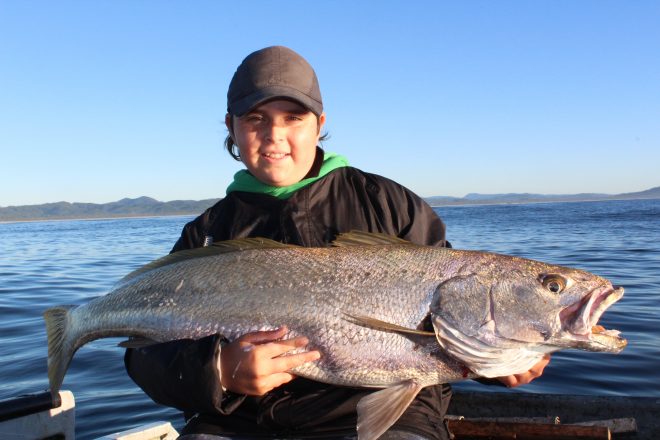 Omri proudly holds up his birthday jewfish, which was also his first.

IT WAS Omri’s birthday and his parents let him chuck a sickie and come fishing as a present. The bar was flat and we were met with glassed out conditions as we proceeded to the local grounds, and hopefully some mackerel. After half an hour we deduced there were no mackerel home, so we headed north. action post-mackerel

I had a spot in mind and was making good time on the mirror-like surface when at the last second I decided to detour to a little rock for a quick drop. Absolutely nothing showed on the sounder, but as we were there I told Omri to drop his bottom rig. Omri barely had time to flick his bail arm over when the rod buckled over and he was on. action post-mackerel

Straight away I called it for a jewfish, but soon after I couldn’t help myself and told Omri I thought it might be a wobbegong. He didn’t fall for it, as he knew he was onto something good and his focus was solely on getting the fish to the surface. I looked over the side and was surprised to see the fish just under the boat – Omri doesn’t muck around!action post-mackerel

By the time I turned around and got the gaff a jewfish was floating beside the boat. I was so pleased for Omri, as I was hoping he would get a quality fish for his birthday. We set up for some photos and enjoyed the moment as the sun began to warm us on a morning that was getting better by the minute. It was always going to be a struggle catching a mackerel this late in the season, but we persisted anyway.

Omri caught a few fish on the bottom rig, but things were quiet. A few moses perch and maori cod kept us amused, and eventually a doggy mackerel took a pilchard bait. The only thing that ate our mackerel baits were mack tuna, but we went home happy. Sunrise on the morning of his thirteenth birthday will be a day to be remembered for years to come as the day of his first jewfish.action post-mackerel

Progressing into winter will see most boats heading wide chasing snapper and reef fish. Just recently snapper have begun to show up in good numbers on the deep reefs. They weren’t there a couple of weeks ago and then they were, just like someone flicked a switch. Heading out wide the other day my mind was on whales and how many I was going to have to dodge before I got to the 50 fathom line.action post-mackerel

It’s just as well I was focussed, because out of the dawn gloom I spotted a log floating in my path. As I adjusted my course around the obstacle, I thought I better pull up and see if there were any mahi mahi under it. Edging closer I noticed some shiny objects tangled in the weed that had adhered to the log. My prize for the morning was a couple of Halco Laser Pros in good condition.action post-mackerel

I’ve lost plenty of lures over the years so it’s always good to get a couple of freebies. I’ll leave them on the dashboard of the boat for another month, just in case a wahoo shows up. There’s not a lot of formation on the beaches after the last lot of big swells, but with a cold westerly snap happening there might be some mullet travelling and some big choppers cruising with them.action post-mackerel