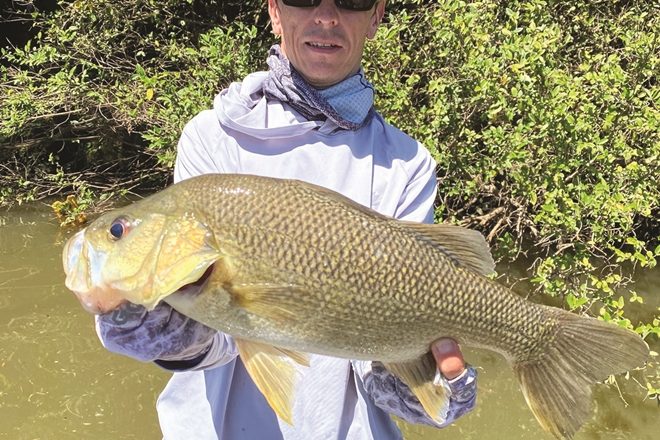 HELLO all and welcome to this month’s edition. It has been another interesting month around the Northern Rivers as far as fishing goes. The weather has continued to heat up and we have seen our first storms and rain for the summer. One big concern for the coming season is the amount of rain we are going to see.

The Northern Rivers is known for flooding over the summer period and rain has been predicted across the board. For now though, we may as well enjoy a little clear water in the lower reaches of the river while it lasts. The water temperature in the river has continued to rise, even with the recent rain and storms.

We have seen an increase in the numbers and quality of whiting in the river over the past couple of weeks. As usual, the run-in tide has been the best bet, and I am expecting the quantities to improve even more over the next month – if we don’t get too much rain that is. Northern Rivers storms

Yabbies and worms have been the pick of bait, as you would expect but several of the better-quality fish have been taken on surface lures over the shallow sandflats. North Creek, Mobbs Bay and a couple of the sandflats around Pimlico Island have been good spots to try your luck with both poppers and stickbaits.

Bassday Sugapen, MMD Splash Prawn, Atomic Hardz Pop 50, Ecogear PX, OSP Bent Minnow 76 and Bassday Backfire Popper lures have all been decent options to try lately. The warm weather has also had flathead on the move, with better numbers showing up from the mouth of the river to the ferry during recent weeks.Northern Rivers storms

The warmer climate has also pushed many of them into deeper water as they attempt to stay cool. The deeper sections in this part of the river will be worth targeting over the next month, particularly with live bait if you want to catch a few of the larger models. Areas like the breakwalls, the porpoise wall and behind the CBD up to Faulks Reserve will all be worth checking out.Northern Rivers storms

For those wanting to catch a feed for dinner, throwing some soft plastics around the drop-offs from the sandflats on the run-out tide will still be worthwhile. Plastics around 70-100mm will be ideal to use and I would suggest sticking with brighter colours. Nuclear Chicken, Lime Tiger, Killer Tomato, Electric Chicken and even Pearl White will all be colours worth trying.

The other member of the warm weather family has also been making an appearance of late. There have been a few mangrove jack taken over the past couple of weeks, on a mix of both lures and live bait. Surface poppers in the early morning have been productive, along with soft plastics around rock walls in the afternoons.

Wardell Bridge to Broadwater has been a little more consistent, which is largely due to the higher water temperature in this part of the river. I would expect we’ll see more activity over the next month along a few of the rock walls closer to the mouth of the river, but for now you’ll have to go for a little drive either in the boat or in the car.Northern Rivers storms

Bass fishing has started to kick along with the warm weather, which means there’s been plenty of success using surface lures early in the morning and late in the afternoon. Poppers, frogs, buzz baits, cicadas and stickbaits have all been producing fish in many different colours. With the warm weather, bass seem to be moving out into deeper water fairly early most mornings, so it would be worth trying a few deep-diving hard-body lures or a couple of skirted jigs in dark colours.Northern Rivers storms

Both of these lures will get you down to where you need to be and hopefully in front of a hungry bass. The Wilsons River and Richmond River arms have both had good numbers of fish in them, but Wilsons is a little more discoloured from the recent rain, so I would recommend staying closer to Coraki than Lismore in that section of the river.

Offshore the fishing has been a little inconsistent, with good catches of flathead and snapper one day and then very quiet the next. As is usually the case at this time of the year, most of the captures have been around the 32-fathom line, but the odd snapper have been coming from the close reefs like Riordans and Lennox.

Bait such as squid and mullet have been the best bet, along with some octo jigs and slow pitch jigs in brighter colours for those who prefer lures. It has been a similar story with mahi mahi, with good quality fish one day and then nothing the next. I am hopeful that an increase in the current over the next few weeks should see a little improvement in the fishing.Northern Rivers storms

The wider you go, the better the fishing has been – with quality pearl perch on the 48-fathom line and a number of bar cod and blue-eye trevalla coming out from around the shelf. For the most part, it has been a mix of bait that has worked on these species, but a few pearl perch have fallen victim to well-presented slow pitch jigs in either silver pink or straight silver colours. Northern Rivers storms

Well that’s about all from me.

Until next time, tight lines!