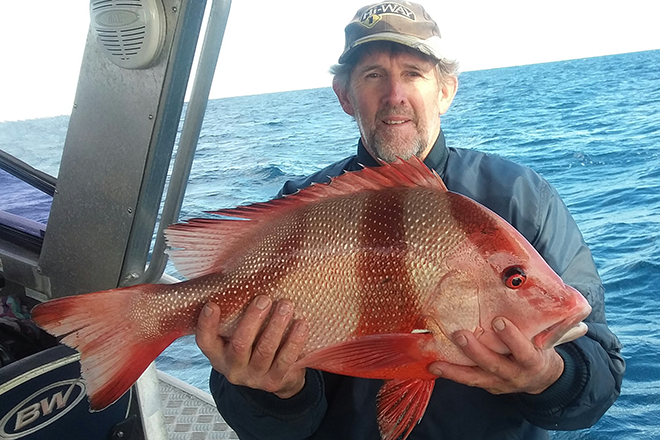 David Svensson with a nice red emperor he caught off Bundaberg last weekend.

BUNDABERG OFFSHORE
For the first time in ages the offshore forecast for the Bundaberg area was pretty good last weekend. It was great to see so many larger boats get a chance to head offshore. By all reports most boats managed to land a quality mixed bag of reef fish, including coral trout, red emperor, parrot, grass sweetlip, hussar and maori cod.

INSHORE REEFS
Most of the inshore reefs fired up last weekend as well. The good news is that some nice snapper have just showed up with the better sized fish being caught at first light, and at dusk and into the night. All the other popular way points such as the Two mile, Ryan’s Patch and the Cochrane Artificial Reef are all producing some nice grunter, mackerel, nannygai and sweetlip.

THE BURNETT RIVER
With the few cold mornings this past week, the winter species in the Burnett River have really fired up. A few nice tailor and school mackerel have been smashing bait fish around the mouth and there is still plenty of big bream along most of the rock walls. Good numbers of blue salmon are being seen both in the Town Reach and up around Fairymead Bend, and have been caught on soft vibes such as the Berkley Shimma Shad 40g with the White Bait and Perch colours both working a treat.

BAFFLE CREEK AND THE KOLAN RIVER
Both the Baffle and the Kolan were also busy for the last weekend of the school holidays. With the good weather in both of the estuaries, plenty of boats were out and about fishing and crabbing. Once again, plenty of tailor, queenfish and trevally were caught around the mouths, whereas further upstream fresh yabbies have been doing the damage on some nice whiting, flathead and grunter around the many sand bars and deeper channels. There were plenty of crabs about and by all reports both the size and the quality of the muddies caught was impressive.

THE ELLIOTT RIVER
Along the beach at the mouth of the Elliott River there have been plenty of dart and whiting with the big tides last weekend. Further upstream some nice flathead, grunter, bream and the odd mangrove jack have been taken up around Sharks’ Nest.

LAKE CANIA
By all reports from the anglers who have fished this awesome small impoundment over the past few weeks, it is fishing very well for Australian bass. A lot of bigger bass have been caught on suspending hard body lures around the edges of the main basin.

LAKE MONDURAN
Even though the weather has been cool, I’ve seen that quite a few barra and bass have been caught. Once again, using lures that suspend in the water column with long pauses has been the key to getting the bass and barra to play the game. At this time of the year search for slightly warmer water and this should hold better numbers of barra