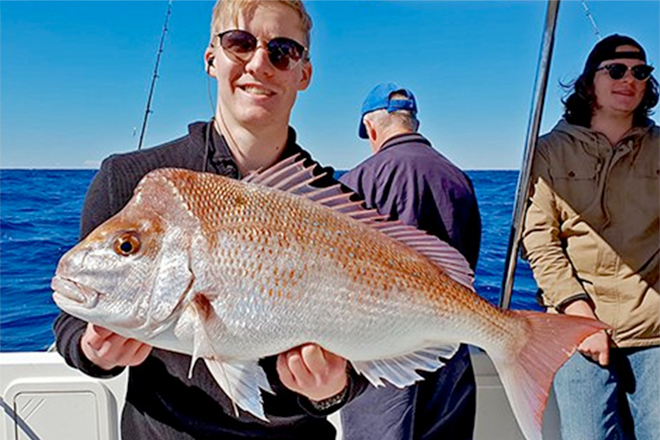 Tim Bell from Kilcoy with a snapper. Photo: fishingnoosa.com.au

Warm days bring on the fish

With the consistent run of cooler nights the water temperature in the river have really started to drop, and fishing the run out tide in the evenings has seen the odd jack being taken on live bait. Mangrove jack tend to feed a bit more in those warmer currents running out of the lakes after the sun has been on them during the warm days.  With the water fairly clear using light fluorocarbon leaders is accentual for the flathead anglers, plastics have been the way to go with some great fish boated over the last week, reds, pinks or chartreuse have been the favourite colours with prawn and paddle tails the better performing profiles.

Trevally and tailor numbers have been outstand in the river, live baits have been getting smashed by these predatory fish, if you can’t get live baits whole pilchards on ganged hooks have working well. For those that love casting surface try casting Strada 120mm Virals and Bassday 95mm Sugapens around drop offs near the frying pan, this has been producing some of the bigger fish. The Whiting are also in good numbers, try areas like the Frying Pan, Weyba Creek and sand flats on the Dog Beach. Live worms, prawns and yabbies have been the best baits. Bream is another great fish that the Noosa River has offered up with some stonkers  taken over the last week, small grub style soft plastics on very light jig heads has been the beat approach for the lure anglers, while the bait brigade have been using mullet gut, mullet fillet, prawns and fowl gut.

Fishing the beaches has seen dart, bream, whiting, and tailor all taken from the surf gutters. Look for those deeper darker gutters and fish 2 hours either side of the high tide for the best results. Lightly weighted mullet strips, bonito and pilchard on ganged hooks have claimed most of the tailor, while fresh beach worms fished on small hooks is a great way to target whiting, dart and bream.  The Noosa North Shore has been very popular over the school holidays and for those that ventured up towards Teewah area have been rewarded with some great flathead off the beach. For those that love fishing the rocks the mornings have been perfect with low winds and small swells, Noosa National park was great for small snapper, jew and sweetlip, while Double Island fished well for tuna and the odd mackerel.

On the offshore scene, it’s all about the snapper, Using Pillies, Squid and livies fished hard on the bottom is working very well, having a lightly weighted pilchard fished in a trail of fresh burley has also had plenty of reels screaming as these fish hit and run for home! Make sure you have a burley log or some burley pellets but go easy on the tuna oil so you don’t attract too many sharks. Mid water feeders like cobia and smaller mackerel have also been taken using this method. Sunshine reef has fished well for sweet lip, snapper, cobia, jewfish, and tusk fish with the odd winter longtail thrown in.

The Zerek Chilli Padi 36g micro jigs worked slowly on the bottom are working well for bigger sweetlip and squire. Up on North Reef; sweet lip, red throat emperor, quality snapper, venus tusk fish and scarlet sea perch have all hit the decks. The anglers that did the run out to Double Island Reefs, the Hard and the Barwon banks have all been well rewarded with plenty of quality fish including larger snapper, pearl perch, cobia, jew, mori cod, sweet lip, tusk fish and cod.

In Lake McDonald the Bass are really starting to school up around the deeper sections, try ¼ ounce spinnerbaits, soft plastics or the new hot bite gang banger G2 lures, with the best bite coming early morning and late afternoon. Another option is to troll the bubble trail and 3 ways area with a variety of different depth diving lures. Lake Borumba has seen Saratoga and Bass being taken on surface walkers and Bassman spinnerbaits. Small plastics in the 2.5-3” size have also been getting the job done.