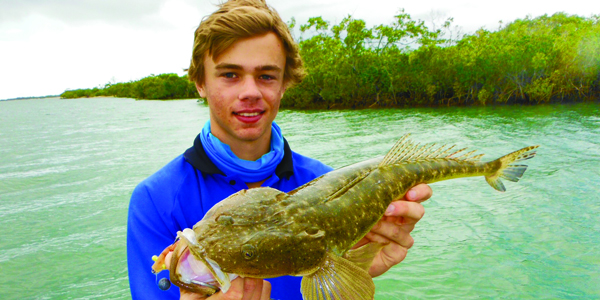 Persistence Pays Off in Bundaberg Estuaries

AS the scorching days begin, I say bring on the warm water dwellers of the Bundaberg estuaries, long days and plentiful supplies of bug repellent. An increase in water temperature along with various other summer-specific factors encourages the movement of a number of species that in a sense ‘shut down’ or only behave in particular ways during the colder months.

These species include mangrove jack and, as the name suggests, summer whiting. Two of my favourite fishing options during the warmer months are targeting mangrove jack in tight structure and enticing thumping big whiting to engulf surface lures.

At the time of writing, the barramundi open season was coming to an end (closed season from midday November 1 to midday February 1), so accompanied by mad-keen fishing mate Matt we headed to a system with an array of creeks that varied in size and description. Having fished the area before, we decided to pepper a fairly deep hole situated between two mangrove islands.

Tidal current effectively bypassed this area, meaning it would be a likely place for baitfish to congregate and subsequently larger predators. Fishing a particularly snaggy section of one of the islands, we found the tide had pushed on top of a muddy ledge where small baitfish and prawns would seek cover from the larger fish that lurked along the deeper stretches.

As the tide slowly began to drop, these somewhat safe shallows started draining, forcing the smaller fish and bait into dangerous territory, and we attempted to imitate the nervous bait using soft plastic and hard-bodied lures. A hot fishing session earlier in the year resulted from casting around this draining ledge, so I was itching for another hot barramundi bite this time around.

For the first hour of the run-out tide we struggled to get even the smallest of inquiries but knew very well that as soon as the shallows began to recede the area should produce fish. After enduring a rather lengthy and fishless period, all signs were promising and we finally began landing sizeable flathead using both lure styles.

These fish were great fun and those that were a prime eating length made for a welcomed addition to the dinner plate, even though they weren’t the line-burning barramundi we were after. Not long after another cracking flatty hit the deck, Matt’s lure was engulfed by a hard-fighting fish we thought to be a barramundi.
After some exciting runs, we caught our first glimpse of what Matt had hooked and were pleasantly surprised by a bulky threadfin salmon that measured in the high-70cm range. The fish had significant girth, which gave it plentiful supplies of explosive power.

Threadfin salmon feed everywhere from shallow creeks and flats to very deep rivers and around ports. These highly adaptive fish rely on their lengthy whisker-like pectoral filaments to sense the vibrations of their food source, meaning they are often very sensitive to loud noises such as outboard motors.

Having persisted for well over 90 minutes in one fairly remote position, noise was not an influence on the fish, proving our endurance and endless casting truly paid off.  The tide continued to drop and after about half an hour with no interest, we decided to quietly drift with the current to reposition alongside a nearby snaggy bank that looked as though it would be likely to hold mangrove jack.

Sure enough, an unweighted prawn imitation soft plastic hung tight in the sticks did the trick, with an excellent-looking jack dragged out after only a few casts. When you’re in a fishing scenario where the options and destinations are seemingly endless, it becomes too easy to get carried away by boredom or a lack of fish, but sometimes it only takes a slight change in tide or an independent feature to trigger a bite.

Having prior experience definitely helps narrow down where and when the fish may be feeding, but this experience can only be gathered by putting in the hard yards.  Though finding the most effective times to fish in certain areas may take some extra effort, when you finally do, taking note or logging this success is an excellent way to make life easier the next time around.

As well as creating a calendar of potentially successful future trips, this allows you to plan out which areas in the system give you the greatest chance of catching fish. After finding fish across a range of tides and times, you’ll be able to leave the guessing game aside and focus on landing that fish of a lifetime.

Joel is blessed with the fish-rich coastline and waterways surrounding the Bundaberg region. With an array of options and possibilities around, he favours the shallow flats and small creeks and specialises mostly in lure fishing. Joel loves to broaden his abilities with new concepts and techniques, so feel free to email him at jmj-31898@hotmail.com
Previous Megabass X-Drift (Product News)
Next Alvey Alloy Series 6500C8 (Product News)