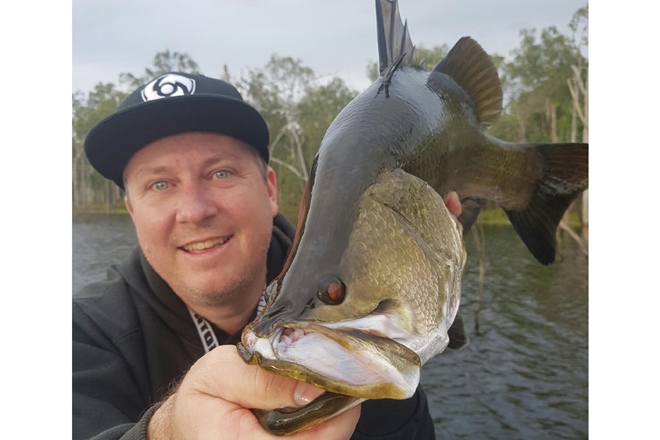 Tim Mulhall with the 72cm barramundi he caught using a soft vibe at Lake Monduran recently.

Plenty of flathead and barra around Bundaberg

We were lucky enough around the Bundaberg area early in the week to have a few days of good weather, allowing a few boats to head offshore before the wind set in.  There were plenty of quality fish caught, including some red emperor, coral trout, tusk fish and plenty of cobia and Spanish mackerel.

Most of the inshore reefs such as Ryans, the Two Mile and the Cochrane Artificial Reef also fished well during the good weather.  There has been good numbers of grass sweetlip, grunter and a few squire as well as plenty of school mackerel and a few Spanish mackerel too.

Both the Baffle and Kolan are fishing very similarly, with plenty of flathead and whiting on the sand flats.  There are big numbers of flathead on the flats and using dead sprats slowly dragged along the bottom is working best. There is plenty of bream and grunter around the gravel beds and a few jacks on the rock bars.  It will be well worth taking a crab pot with you next time as there are a few mud crabs starting to move about.

There is still plenty to be caught in this system with big numbers of bream getting about.  Most of the bream have been caught by using chicken breast as bait.  There is still plenty of whiting, flathead and sicklefish about on the sand flats, and this should only get better leading into the full moon.  The mid reaches of the Burnett are producing plenty of grunter and blue salmon.  Most have been caught on live baits and soft vibe lures.  As the cooler weather keeps coming the blue salmon fishing will only get better. There are also plenty of prawns about in the deeper holes, so don’t forget your cast net.

With the full moon on its way the Elliott will be well worth a look for the large sand whiting.  Try fishing the making tide leading into the evening and use either fresh yabbies or worms as bait.

With the cooling weather, the bigger bass have moved up onto the weed edges, and targeting them on surface poppers early morning or spinnerbaits as the day goes is the way to go.  Bass to 45cm have been caught using these methods.

It’s been another great week for catching barra in Lake Monduran with plenty of barra to 80cm being caught.  Most of the barra have come off points leading into bays.  The key is to find the barra on your side-scan sounder first, then jig soft vibes or twitch suspending hard body lures around the tree tops.  Stand-out lures for the barra have been the new Berkley Shimma Vibes and the trusty old Jackall Squirrel.