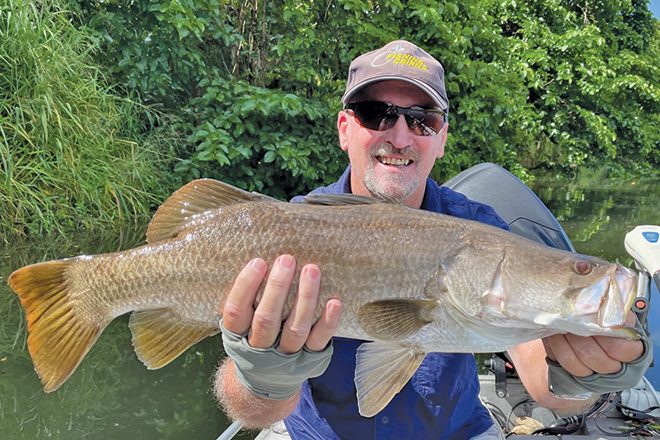 The first barramundi of the day.

Push up river to the fresh

With the closed barramundi season fast approaching, we made a quick dash up the river to flick a few lures. An early morning high tide ensured we were able to push up the river into the fresh. up river fresh

With his first cast my friend Brod enticed a small sooty to take his lure, an early first fish is always a good sign of better things to come. We noticed a fish breaking the surface in shallow water further upstream, so we pushed up closer to it with the electric motor. First cast and I was on. up river fresh

It was a decent fish, but it had the better of me and within seconds it had spat my lure out and couldn’t be tricked again. The first barra rose out the murky depths to take my Rapala Shad Rap 5, and as it struggled a 2m shark circled in anticipation of a free meal. Thankfully, when it saw the boat it changed its mind and swam off leaving me and the barra to compete for supremacy. up river fresh

Brod caught a nice little trevally – in the fresh these guys provide a great fight on light tackle. I managed to snag a good-sized jungle perch and Brod landed a bigger than average sooty grunter, which on impact had Brod thinking he had a big silver perch on the line. up river fresh

We drifted down past an over-hanging tree with a big shade patch underneath – a perfect spot for jungle perch. Brod’s first cast dragged about six to eight fish nearly all the way back to the boat. My cast was then surrounded by another eight to 10 jungle perch. Though despite all the interest, we could not land a fish.

I’ve no doubt they had other things on their mind and were congregating to spawn. We finished off the morning catching my first shark on a lure.
I actually saw the beast come up and snavel the lure. That fight didn’t last long of course. A short time later I landed another nice barra to close out our expedition.

To book a charter in the Cairns region, click here!