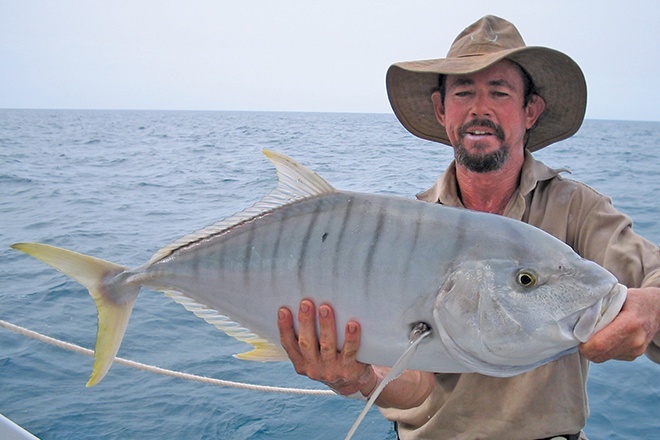 September on Cape York is very much a transitional month weatherwise. This is the peak of the dry season – conditions are definitely warming and there’s an increasing chance the seemingly relentless southeast trade wind may ease off from time to time. Reef Cape York

Inshore water along northwest Cape York is usually fishable by smaller but seaworthy boats of 4m plus, up to a couple of kilometres offshore, even when windy. However, as that trade wind eases, so does the ability to range further offshore. And fishing these inshore reefs may come as a bit of a surprise for those more used to fishing the Great Barrier Reef. Reef Cape York

While there are some deep reefs about, which can be incredibly productive – and they generally are out wider – many reefs lie in relatively shallow water. They too provide excellent fishing. Shallow reefs will normally be visible as darker patches than deeper reefs located by a sounder. And even though most of the east coast reef fish also occur in the Gulf of Carpentaria, the catch ratio of each species is often different.

As an example, while coral trout are still common catches here, fingermark or golden snapper are often boated more frequently, as are tuskfish – and some absolute crackers too! Fingermark over 70cm are not unusual and of course are absolutely fantastic to catch – what beautiful looking and tasting fish. However, it is important to remember that fingermark are very slow growing, so limiting keep is important to make sure populations stay healthy. Red emperor, large and small-mouth nannygai and sweetlip are all in the Gulf reef mix too, as are jewfish, with a few monsters around, often caught near river mouths.