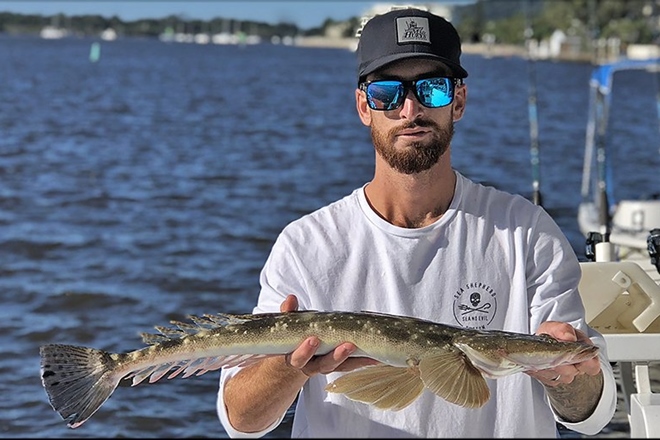 Jimmy caught and released this flathead along the Noosaville stretch. Photo: fishingnoosa.com.au

The Noosa River has seen plenty of quality bream being caught throughout the system as temperatures have cooled. The river mouth has been producing some nice fish to 35cm on mullet strips, mullet gut and fowl gut. Smaller   soft plastics like Keitech 2 and 3 inch Easy Shiners on lightly weighted jig heads have also been of the lures of choice, cast around pylon and pontoons and left to sink slowly, with the bigger fish picking them up on the drop. Flathead have also been plentiful with a lot of good sized flathead being caught from the lakes all the way down to the river mouth. Live baits of herring and poddy mullet have claimed some nice fish, while soft plastic in prawn profiles have been working well, trolling hard body lures is another effective method and a great way cover a lot of ground. Good sized golden, diamond and giant trevally along with tailor have been taken at Woods Bays and the Noosa Sound early morning and late afternoon. Surface lures are the way to go with Strada Zieda and Atomic walkers claiming some good fish.  There have been plenty of school sized jew in the upper reaches of the river with live baits doing most of the damage, for those that love to throw a lure the new Berkley Shimmer Shades have been preforming well.  Whiting are still in good numbers with Gympie Terrace, The Dog Beach and the Frying Pan the pick of the spots. Live worms, yabbies and peeled prawns have been the perfect baits.

With cooler weather and bigger swells coming in, most angler hit the water last Friday and Saturday to make getting across the bar a little easier. Starting at Sunshine Reef there has been a good mixed bag including squire, maori cod, sweetlip, pearlies & coral trout. Fishing the slow sinking floater method seem to be the most productive with plenty of fish taken as the bait makes its way through the water column. North Reef and Chardon’s reef have produced snapper, pearlies, moses perch, sweetlip, and tuna. Micro Jigs have again proved there worth with plenty of quality fish bagged using this method. Some anglers also did the run out to the Barwon Banks and up towards Double Island with reports of spanish and spotted mackerel as well as Mack and long tail tuna, schools of tuna are small and moving fast so you may only get one or two casts into them. Off the bottom there is a great mixed bag including red emperor, good size pearlies, snapper, sweet lip, cod and jew.

The beaches have been glorious with the early morning and late afternoons the prime times, angler that have made the trip up to Noosa’s North Shore were not disappointed with some good catches of chopper tailor reported, along with the tailor there were some nice  bream, flathead, whiting and bigger dart. Most angler are bait fishing with pillies, mullet strips, and salted bonito. The rock hoppers have been getting some nice fish at the rocks around Noosa National Park and Sunrise Beach, tailor, large bream, sweetlip and small snapper have all been taken.

In Lake McDonald and Lake Borumba: Surface walkers like Lucky Craft Sammy 65, Jackson risk bait and frog profile walker cast into the shallows during early morning and late afternoon have been good for bass and saratoga. Small paddle tail plastics and vibes worked along bubble trail and deeper drop offs have been successful during colder weather. The bass bite will start to slow as the water cools so persistent will be the key.