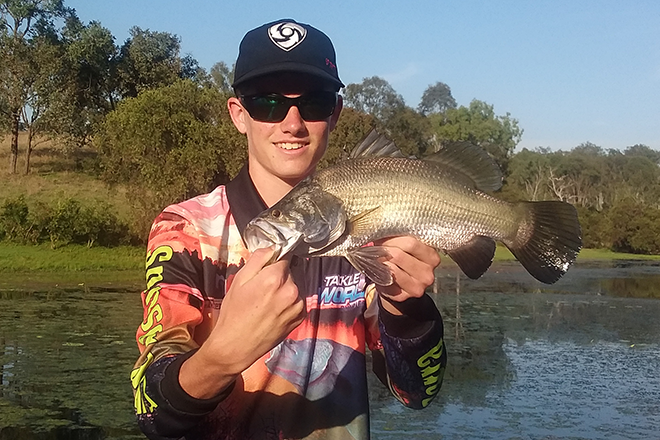 Matthew Smith with a little Monduran barra from last weekend.

Rivers and impoundments magic around Bundy

Well, another Melbourne Cup has been done and run for another year, and I hope everyone has recovered and is looking forward to wetting a line this weekend.

For any big boats hoping to head offshore from the Bundaberg area this weekend, unfortunately at the moment, the weather isn’t looking too flash, so it’s looking like most of the action will be restricted to the many rivers and impoundments around this magic part of the world. As always, check the local weather report before heading out.

THE BURNETT RIVER
The good old Burnett is back, firing on all cylinders. Once again there have been good numbers of big flathead caught between Strathdees and the mouth of the Burnett River. Soft plastics in the 3” to 4” range have been working a treat with one of my favourites being the Gulp 4” Swimming Mullet in Glow colour. This lure has also been very effective on the grunter this past week. Now the barramundi closure is in place for all of our local rivers, a lot of anglers have slightly down-sized their gear and tackle and are targeting mangrove jacks around Bundaberg. Some of the hot spots for jack in the Burnett have been Kirby’s Wall, the hot water out-let near Millaquin Bend, and up around Austoft Rocks. Both lures and live baits have been working well.

ELLIOTT RIVER
With the bigger tides this weekend, the Elliott will be well worth a look for some big summer whiting and big flathead. The first hour of the run-in tide always seems to get the fish fired up with fresh yabbies and beach worms both being dynamite baits on these estuary species. There was a whisper that there are a few large muddies getting around, so it might be worth putting a few pots in while you soak a few baits.

BAFFLE CREEK AND KOLAN RIVER
People staying at the Miara Caravan Park have reported catching good numbers of legal grunter, summer whiting and flathead not far from the park, around the mouth of the Kolan. Further upstream, areas such as Yandaran Creek and the tram bridge are starting to produce some nice mangrove jack and trevally. The top reaches of the Baffle have been fishing red-hot for mangrove jack, queenfish, tarpon and trevally. Anglers have had some epic sessions by casting small hard body lures around structure and snags. Just be careful navigating around the top reaches due to the amount of sand and rock bars.

LAKE MONDURAN
It was fantastic to see so many boats on the water last weekend, trying to catch the golden barra. We managed to hook up three barra to 74cm for the morning with our lures being the Rapala Shadow Rap and Jackall Squirrels. Quite a few barra have been smashing surface lures early morning and late afternoon around the many shallow weed beds. This is one of my favourite methods of barra fishing as there is nothing like watching your lure get taken off the top.