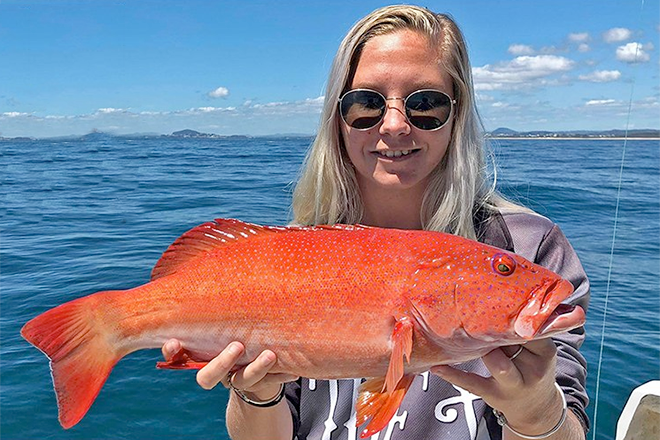 Rivers clearing up on Sunshine Coast

What a turnaround for the weather. The rivers are starting to clear up, the swell is dropping and offshore the winds have dropped enough to let everyone have a shot at catching a feed.

Offshore the inshore reefs have been the pick with Sunshine providing coral trout, snapper, pearl perch, tuskies, sweetlip, cod and the occasional cobia and mac tuna. There have been reports of tuna busting up with birds working the bait balls around Laguna Bay and toward DI. Be sure to have a selection of slugs and stickbaits ready and change the hooks to inline singles for a stronger hook up and a faster, safer unhook. Out wider the larger boats managed to get to DI and Barwon Banks with reports of amberjack, yellowtail kingfish, cobia, tuskies, pearl perch and snapper coming in. When headed out to the wider grounds be sure to carry some larger knife style jigs which let you get down quickly to where the big fish are. Rip these up and hold on as any passing amberjack or kingfish is likely to smash one.

The surf has been firing up with several solid taylor over 60cm caught around Yaroomba, Point Arkwright and the river mouths of Maroochy and Noosa. These fish mainly taking gang hooked pilchards but also taking larger 90-120mm stickbaits like the Shimano Rock slide. In closer, the gutters have been producing a mixed bag of whiting, bream, dart and smaller flathead. These fish will take smaller prawn and worm baits on lighter lines which suits the kids and those with estuary combos.

In closer the rivers have also started to fire up with some solid trevally, tailor, flathead, jacks and bream getting caught. The lower estuary is the pick of the spots with the dog beach producing bream, whiting, flathead and trevally. The sunken trees are worth a flick if on a boat as this area provides some great cover to predatory fish like mangrove jacks. Live baits of herring and poddy mullet are best with hardbodies like Zerek Tango shad a great option.

The entrance to woods bay is always worth casting hardbodies and soft plastics around for flathead and trevally. The better sized plastics to use are in the 3-4 inch size with curly tail and paddle tails working best on 1/6th-1/4oz jig heads and 6-10lb leader. Take a look at the new range of Entice soft plastics.

Around the Noosa Sound and up toward Lake Weyba you can expect to find bream, whiting, flathead and jacks. As you get into the flats of Weyba be sure to have a try and catch whiting on surface lures. These fish are great fun on surface lures and will pack attack a lure when retrieved with a constant steady rate retrieval. Lures to have include the new Bassday Sugapen 58mm and Atomic K9 walkers.

Freshwater is certainly warming up with the recent boost in daily temperatures. The surface action is great early morning and afternoon. Lures to throw would be weedless rigged Keitech easy shiners and Chasebaits 3 inch paddle bait in apple juice colour. Surface lures include the ever popular Lucky Craft Sammy 65 and Jackson Risk Bait. For the rest not throwing surface lures then hardbodies including Daiwa Double clutch and Lucky Craft pointers are the go.