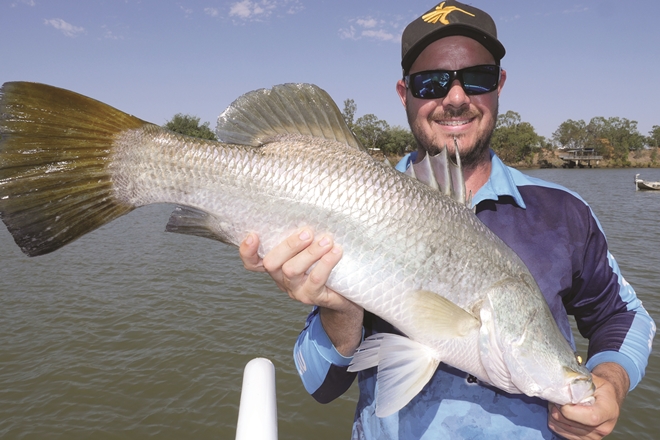 The town reaches of the Fitzroy will be a busy place come February 1. This barra was caught by the author just before the season closed.

IT has felt like an eternity since the saltwater barra season closed, but from February 1 barramundi will be back on the radar throughout the Rockhampton net-free zone and elsewhere in Queensland.

I did a run a few weeks back during the closed season looking for big king threadfin salmon in the top half of the Fitzroy River. I checked every sneaky king spot I had and they were all empty. My guess is they had all made their way to the mouth and beyond for spawning purposes. However, I found a few little schools of small threadies. I managed to boat about 10 but they were all undersize except for two that were just over legal and kept for thready sangas.

Some black jewfish and grunter were mixed in too. Not much size to them, but a lot of fun was had.

The barra we saw on the sounder though, told a different story. It was hard to leave the rods in the locker, which means kick-off for the season is going to be a cracker. If we can get some nice weather to go with the outstanding tides for February 1, it will be an opener to remember.

It’s a sad state of affairs for rain. We have had pretty much nothing all summer and the forecast isn’t looking good. All we can hope for is a late wet. In the past three years the monsoon up north hasn’t been active until after February, so fingers crossed we will see a bit of wet stuff soon. Thanks to the lack of rain, the Fitzroy River will be in prime condition, with high salinity levels right to the barrage.

In fact, the entire Rockhampton net-free zone will be in tip-top shape. With the quarter moon falling on February 2, there will be so many clean water options to go and chase a barra. I believe the number one place to target barra for the opener will be the Fitzroy River. It’s such an easy day around the town reaches. For starters, there are two four-lane boat ramps, each with ample trailer parking and a floating pontoon.

Once you’ve launched, you don’t have to travel large distances burning excess fuel to find fruitful ground. If you’re confident reading what your sounder screen is showing, you will find your own patch of awesome without worry. I highly recommend the Humminbird Helix G3N sounder. Straight out of the box it reads super crisp. Once you start playing with settings like scroll speed, sensitivity and contrast, you can become distracted, instead of fishing.

For the run-out tide down to low and back up to half tide, start at Gavial Creek and make your way down the deep side of the Fitzroy and along the big bend that sweeps to the left. This area is known as Devils Elbow. Plenty of spots along here hold good numbers of barramundi and threadfin salmon. When you get to the end, the river will bend to the right. If you scan along the left side of the bank, you will find good schools.

Be careful of the rocks in this area. Just sit off the bank and use your side imaging to search for fish. Having a look at these areas on low tide will give you a good understanding of structure. If you’re chasing live bait to fish around here, the drains on the shallow side present a good option. You can also get good live bait in Gavial Creek itself.

Most bait fishos will throw a cast net off the pontoon before they leave. They can generally get enough prawns and herring for a session. If you choose to use a cast net from the pontoon, please be courteous and mindful of people trying to get their boats in and out. Also, use your bucket to pull up some water to clean up your mess before you leave. Nothing is worse than slipping over on jellyfish or mud left by cast nets.

Once the tide comes up high enough (about two hours either side of high), it’s time to fish around the bridges. Gravel and rock patches around the old bridge present a good option. These patches would have to be the most productive places to catch barra throughout the entire town reaches. Trolling between the old and new bridge with 3-4m diving hard-body lures is another tradition that works well. Sometimes I will do this while watching the sounder and looking for schools.

Keep varying your boat’s line so you’re searching while trolling through the entire Rockhampton net-free zone. I’ve caught plenty of barra on the troll when I haven’t seen them on the sounder. There’s nothing like a bonus barra.

From here, check around the pylons of the new bridge and train bridge. These are deep areas that hold both barra and king. Using a deep vertical jig is the best option. When fishing from the train bridge to the 400m mark from the barrage, the best thing you can do is jump on Google Earth and plot a series of marks 400m away from the barrage, transferring the marks to your GPS. It makes it easy to know when to pull up. There are a couple of signs but the one on the north bank is about 70m out. I was told these signs are to make people aware of the 400m limit and not mark the distance.

This sort of confusion is why I plotted my own markers. From there you can troll around while watching the sounder. Barra and king will come up onto the shallow bommies to feed. If you can locate numbers, you can keep trolling over them or pull up and cast. I prefer to cast so the lure is in front of them longer, and so I can work things like soft vibes and suspending hard-bodies to try to tempt them to bite. If you do venture into the town reaches of the Fitzroy, just take it steady until you get to know the place.

There is a safe passage that runs down the south side. If you’re worried, go for a walk over the bridges and have a look on low tide. You can also jump on Google Earth. A good time to have a look at the town reaches is on a busy day when plenty of boats are on the water. Taking careful note of where they travel will give a good idea of where to go. With high salt levels, you will be able to catch a variety of species.

Barra, threadies, grunter, cod and black jewfish are just a few likely prospects in the Rockhampton net-free zone. The next 140cm black jew that gets caught along Devils Elbow won’t be the first or last. I wouldn’t be surprised if we see a few sneaky mangrove jack turn up soon as well. Another top place to check out if wanting a barra fix is the Casuarina cut-through. If you put in at the Port Alma ramp and head left from the ramp, and then left into the first main river system, you’ll be in Casuarina Creek. It’s then about a 25km drive to where the river has broken through.

Scanning around the island in the middle and banks on either side will show you where the barra are, depending on which way the tide is going. Just after the quarter moon is best for this area when the water clarity improves. The small tides will settle the sediment. Either side of the cut-through are many creeks that are stacked with timber. Great snags are also plentiful in the main system. Spend a couple of days here and you will find some really cool stuff.

Soft vibes such as Zerek Fish Traps are reliable. Timber hard-body lures are a good go-to if other presentations aren’t working, such as Old Dog and Lethal Lures. You will need a fair few variations of weedless plastics as well. Atomic Plazos are cool plastics, with plenty of little feelers that wave around on the lift and drop. Z-Man GrubZ and SwimmerZ are top choices too.

If you haven’t used weedless plastics, then ask at your local tackle shop for a bit of help. The staff members are normally happy to assist. It can take out a lot of the guesswork if a guru is willing to show you a few things before hitting the water, especially in the often-snaggy Rockhampton net-free zone.

We will be fishing for four or five days during the season opening, a now traditional activity. You can make your own fun and add in a few bets among mates for a bit of competition. Hopefully we will get a few. After reading this article for a few tips, I hope you do too.