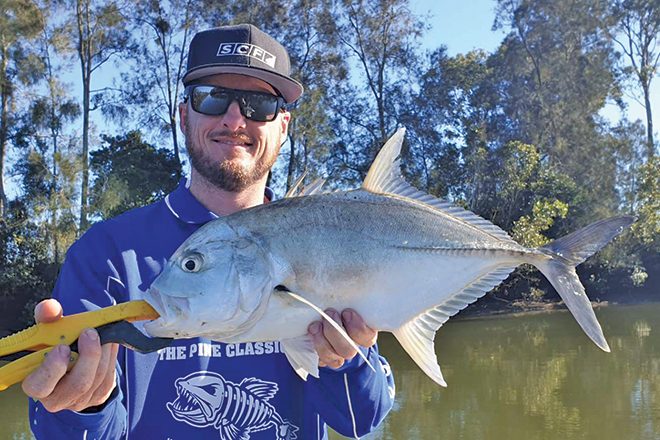 One of Phil’s trevally that helped him take out the trevally category of the SCF competition.

The SCF Australia Garmin Research and Fishing Competition was held at the start of September. My friend Phil and I decided to have another go it at this year. In 2020, we targeted a lot of different species and ended up missing out on a few prizes by a centimetre or two. This year we came up with a good plan and even got out for a few pre-fishing sessions leading up to the competition. SCF Australia competition

Our goal was to target four different species at different stages of the weekend. We knew where the fish were that could take out these sections of the comp, so all we needed to do was catch them. The competition has a great concept. There are 15 inshore species to target and 15 offshore species.
You need to catch the biggest two of each species to take home the prize of $500 cash. SCF Australia competition

There are a few other categories to target as well, but we settled on three inshore and one offshore species. The briefing was held on the Friday afternoon with fishing to commence from midnight Friday and finish at 12noon on the Sunday. We planned to start at Bribie Island to target our first few species and then move to the Caboolture River to try for a shark and possibly a threadfin salmon. SCF Australia competition

Our agenda kicked off with filling the live well with yellowtail pike, as these are an awesome live bait and jewfish, our first target, are very fond of them. We planned to have a go at both the offshore and inshore jewies. The offshore section was always going to be a tough one to win, but we got on the board early with a 75cm and an 81cm.

We were starting to get a bit tired, but the tide was almost perfect for our inshore jew spot. Thankfully they were on the chew straight away and I landed an 89cm and an 87cm in consecutive casts. This gave us a chance to roll the swag out and catch an hour or so of sleep before it was time to hit the beach in search of dart.

We don’t normally fish the beach for dart and we struggled to get one off Bribie beach in the pre-fish, but it was worth a try. To our surprise, I got two small ones straight up on some cured yabbies we had pumped the week before. Once more we didn’t attempt an upgrade.

Dart isn’t commonly targeted in the comp, so we thought we might be in with half a chance. We pulled the boat out from Bribie and went home to quickly freshen up before heading down to the Caboolture River for the night.